"This is the first warning," the note threatened 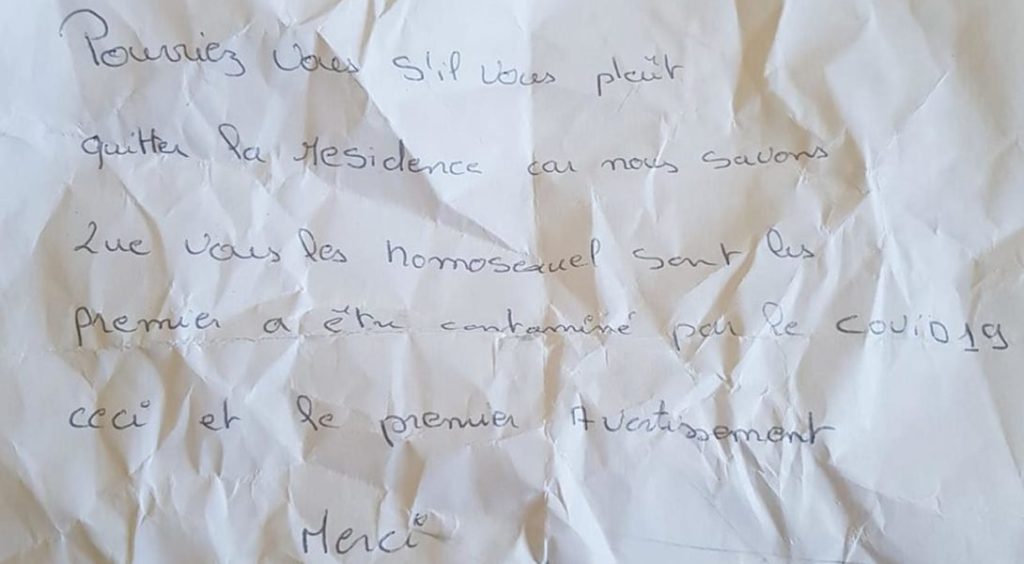 French police are investigating after a gay couple in Marseilles were told to leave their apartment because “homosexuals are the first to be contaminated” by the COVID-19 coronavirus.

David, a 33-year-old caregiver, told LGBTQ magazine TÊTU that his partner, an Uber Eats driver, found the note on the windshield of their car while leaving for work.

“Could you please leave the residence because we know that you homosexuals are the first to be contaminated with COVID-19,” the note read. “This is the first warning.”

The men took the note to their local police department, but were allegedly told that it was “not a threat but a warning,” and told to file a report.

After posting the note to his Facebook page, David said he was contacted by Bordeaux Police’s LGBT division, which told him to file a complaint online.

“[They] told us that they were going to make sure it was treated, that maybe they could recover the DNA, analyze the writing,” David said.

According to David, the couple lives in a “secure residence” in the city, which lies on the southern coast of France and has been on lockdown due to COVID-19 since March 16.

David believes the note was written by someone in their building, with access to their car, and “with whom we’ve had little neighborhood problems,” including the resident reportedly filing a complaint against a newly married Muslim couple for playing “oriental music.”

“I think he is a person without intelligence and education,” David said. “I think this person is certainly religious and that he truly believes in what he says…. To [write] bullshit like that, you have to believe it.”

David said he feels particularly targeted, due to what he called an increase in threats and anger directed against his colleagues at the hospital where he works.

“It affects me doubly, I’m a carer and I’m gay,” he said. “I can understand that, psychologically, it’s hard to be locked up at home, I think there are some who crack a little…. Personally, I didn’t expect to receive a word like that about my sexuality. I had never been confronted with homophobia in my life.”

He told TÊTU that, despite the intervention of Bordeaux’s LGBT police division, he is “not reassured.”

“I’m looking a little more behind me,” David said. “My spouse has a strong character, he’s pretty fiery. I’m pretty calm. I wonder what it’s going to be like next time. Are they going to smash my car? Are they going to wait for me downstairs?”

While gay people are not the “first to be contaminated” with COVID-19, LGBTQ groups have warned that LGBTQ people are “particularly vulnerable” to coronavirus because of a number of issues, including increased rates of smoking among LGBTQ people, higher rates of HIV and cancer, and healthcare discrimination.

However, health advocates have noted that people living with HIV who have an undetectable viral load due to regularly taking antiretrovirals do not have any more severe reactions to COVID-19 than those without HIV.

A number of conservative and religious figures have attempted to blame LGBTQ people for COVID-19 coronavirus.

Last month, White House-credentialed broadcaster Rick Wiles claimed that the death of an LGBTQ lawyer who contracted COVID-19 was God’s “judgment.” In January, he said that it was sent by God to “purge” gay people.

Earlier in March, a Tennessee pastor said coronavirus was a “reckoning” from God because of marriage equality. And that same week, a guest host on The Rush Limbaugh Show said gay people are the reason San Francisco was placed on lockdown due to the virus.

Conservative author Mark Steyn said the city’s mayor didn’t want “all the gays dropping dead” in a “big gay apocalypse,” and said gay people are “the ones with all the compromised immune systems from all the protease inhibitors and all the other stuff.”

And an Orthodox rabbi in Israel and an American pastor both claimed in March that coronavirus was divine punishment for allowing LGBTQ people to exist.

New York Congressman Ritchie Torres (D) introduced a bill earlier this month to require air travelers to be vaccinated against COVID-19 before they are allowed to board domestic and international flights embarking from or arriving in the United States.

Under Torres' bill, the Secretary of Homeland Security would be directed to ensure that "any individual traveling on a flight that departs from or arrives to an airport inside the United States or a territory of the United States is fully vaccinated against COVID-19," and tasks the Secretary with granting exceptions for individuals who are ineligible for vaccination, such as young children, or medically unable to be fully vaccinated.