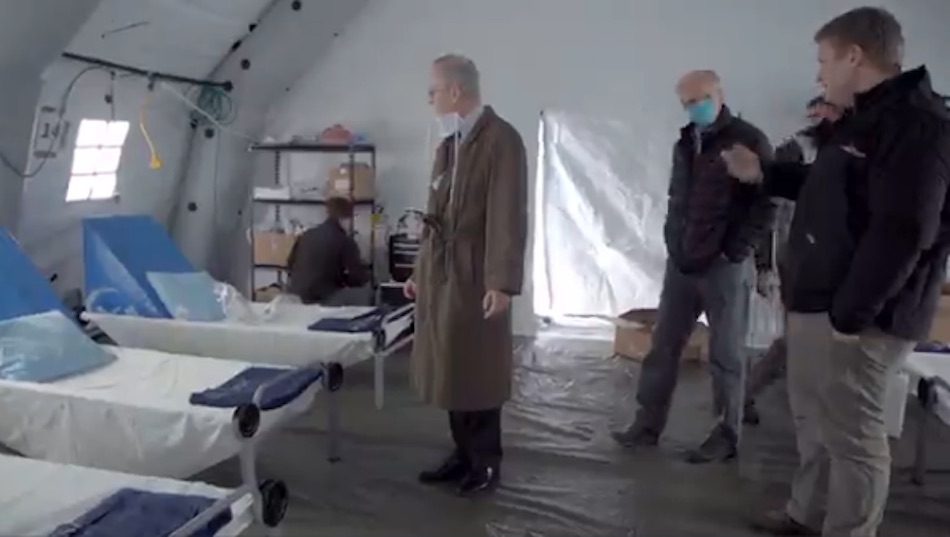 LGBTQ advocates are expressing concern after Samaritan’s Purse, a North Carolina-based humanitarian aid organization with an evangelical Christian bent, established a 68-bed tent hospital in Central Park to treat overflow patients from Mount Sinai Hospital who are experiencing respiratory distress due to COVID-19.

While the additional facility will lessen the burden on the main Mount Sinai Hospital, equality advocates say there appears to be a catch: all medical workers working at the facility have been asked to agree with a “Statement of Faith,” part of which expresses vehement opposition to homosexuality and variant gender identities.

Samaritan’s Purse is led by Franklin Graham, an evangelical preacher and the son of the famous televangelist Billy Graham. Franklin Graham has previously made disparaging comments about the LGBTQ community, and, critics claim, has a track record of attempting to use humanitarian missions to proselytize to desperate people seeking out food, medical care, or other services in the midst of manmade, epidemiological, or natural disasters.

According to the website for Samaritan’s Purse, the organization is specifically seeking Christian medical staff to operate the Central Park extension.

Medical workers recruited by Samaritan’s Purse are expected to read and abide by the organization’s “Statement of Faith” that regurgitates evangelical Christian doctrine, particularly with regard to human sexuality and the fixed, binary nature of gender.

One section reads: “We believe God’s plan for human sexuality is to be expressed only within the context of marriage, that God created man and woman as unique biological persons made to complete each other. God instituted monogamous marriage between male and female as the foundation of the family and the basic structure of human society. For this reason, we believe that marriage is exclusively the union of one genetic male and one genetic female.”

According to the Gothamist, a spokesperson for Mayor Bill de Blasio — who praised the erection of the overflow tent hospital — said that the hospital will operate as a Mount Sinai facility, and therefore must adhere to the hospital’s policy prohibiting discrimination based on sexual orientation and gender identity (in compliance with both city and state nondiscrimination laws).

“Our record on human rights is clear; and we are confident that the joint effort by Mt. Sinai and Samaritan’s Purse will save New Yorkers’ lives while adhering to the values we hold dear by providing care to anyone who needs it, regardless of background,” Jane Meyer, the spokesperson for City Hall, said in a statement.

But openly gay New York State Sen. Brad Hoylman (D-Manhattan) fired off a warning shot, indicating that he — and others — would be monitoring the situation closely to ensure that Samaritan’s Purse isn’t turning away or refusing to treat patients whose sexuality, identity, or lifestyle choices (such as a someone who engages in extramarital sex, or an IV drug user) do not conform to the “Christian” ideal expressed by Samaritan’s Purse.

“COVID-19 doesn’t discriminate, and neither should Franklin Graham,” Hoylman said, as reported by the New York Daily News. “It’s unacceptable that a New Yorker infected with COVID-19 could be subjected to discriminatory treatment from an organization whose leader calls us ‘immoral’ and ‘detestable.’ 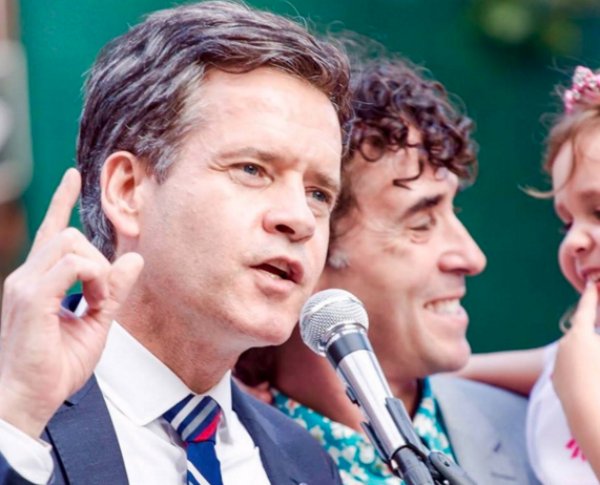 “Sadly, beggars can’t be choosers: New York needs every ventilator we can get,” Hoylman added. “But homophobic pastor Franklin Graham and his field hospital operation in Central Park must guarantee all LGBTQ patients with COVID-19 are treated with dignity and respect. We’ll be watching.”

Hoylamn, working with civil rights attorney Roberta Kaplan — best known for successfully arguing before the Supreme Court that a section of the Defense of Marriage Act was unconstitutional and that the federal government should recognize legal same-sex marriages — has crafted a legal document for medical workers to sign when they are providing services in a place of public accommodation.

By signing, medical providers agree to abide by New York regulations prohibiting discrimination against patients based on a number of characteristics, including sexual orientation or gender identity.

“For decades, Franklin Graham has traveled throughout the country preaching a gospel of bigotry and hate. He’s said advocacy for LGBTQ rights is ‘immoral’ and that marriage equality is ‘detestable.’ His organization supports those awful opinions and actively recruits volunteers who share them,” Hoylman said in a press release. “Graham and his volunteers are free to adhere to whatever bigoted beliefs they’d like. But when they come to New York they need to abide by our Human Rights Law, which ensures marginalized New Yorkers are not subject to discrimination.

“We can’t let a pandemic change New York’s values,” he added. “New York City must require every doctor or volunteer working at Graham’s Central Park field hospital — along with anyone providing medical services in a place of public accommodation — to sign a statement affirming their commitment to following New York City’s Human Rights Law.”

Questions over whom Samaritan’s Purse medical staff will treat underscores a larger concern that LGBTQ advocates have been expressing for some time about a trend toward faith-based refusals, particularly as the Trump administration seeks to expand exemptions that would allow health care providers to refuse to perform certain procedures that purportedly conflict with their religious beliefs.

In a letter to Mount Sinai staff, Dr. Dennis Charney, the dean of Mount Sinai’s Icahn School of Medicine, and Dr. David Reich, the president and chief operating officer of the hospital — who identifies as LGBTQ himself — acknowledged concerns about Samaritan’s Purse’s policies and political positions, but effectively said that the hospital is accepting help from Samaritan’s Purse due to the severity of the pandemic and the importance of saving lives, reports Gay City News.

“While we have strong differences of opinion with Samaritan’s Purse on this issue, this does not detract from our shared mission to save lives in our wonderfully multicultural and diverse city,” Charney and Reich wrote. “While many in this nation could have responded to calls for help, Samaritan’s Purse not only responded, but did so in a fashion that no other organization could accomplish so rapidly.”

In response to a follow-up inquiry from Metro Weekly, a Mount Sinai spokesperson issued a statement clarifying that all health care workers at the field hospital respiratory care unit will adhere to Mount Sinai’s nondiscrimination policy.

“In order to help address the overflow of patients in our hospitals, Samaritan’s Purse and The Mount Sinai Hospital are working together to establish a Field Hospital respiratory care unit which will be run as a part of Mount Sinai,” spokesman Jason Kaplan said in the statement. 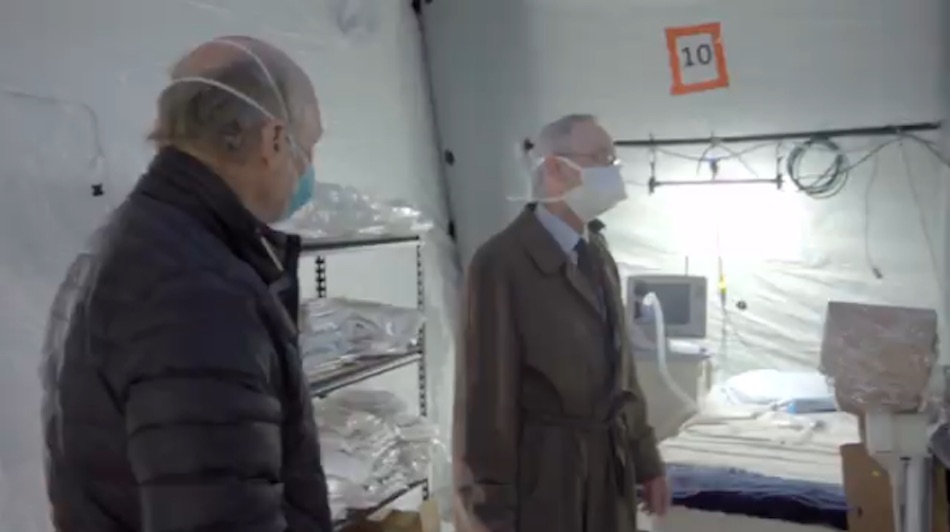 Inside a tent at the Samaritan’s Purse field hospital – Photo: Mount Sinai Hospital.

“As such, all workers will adhere to The Mount Sinai Hospital principles and guidelines when it comes to not discriminating against patients or staff based on actual or perceived race, creed, color, religion, national origin, sex, gender, gender expression, gender identity, age, disability, marital, partnership or parental status, sexual orientation, alien or citizenship status, veteran or military status, or any other characteristic protected by law,” Kaplan added. “In short, while our organizations may have differences of opinions, when it comes to COVID-19 we are fully united: we will care for everyone and no patients or staff will be discriminated against.

“Ultimately, this virus kills people of every religious beliefs, ethnicity, gender identity and sexual orientation,” he noted. “New York has lost over 1,000 people already, and more are dying every day. Mount Sinai and Samaritan’s Purse are unified in our mission to provide the same world-class care to anyone and everyone who needs it. No questions asked. We are all focused on one thing — saving lives.”

A spokesperson for Samaritan’s Purse rejected claims that any LGBTQ patients seeking care might be turned away or denied care.

“Samaritan’s Purse does not discriminate in who we help, and we have a decades-long track record that confirms just that. We do not make distinctions about an individual’s religion, race, sexual orientation, or economic status,” Kaitlyn Lahm, the assistant director of marketing and media relations at Samaritan’s Purse, said in a statement responding to a Metro Weekly inquiry.

“Our doors at the Emergency Field Hospital in the East Meadow are going to be open to all New Yorkers who need our help. We are here to save life, which is precious in God’s sight — and we do it all in Jesus’ Name. We are a Christian organization and we hire Christians who share our statement of faith. We have a common denominator of our faith in Jesus Christ and sharing that hope.” 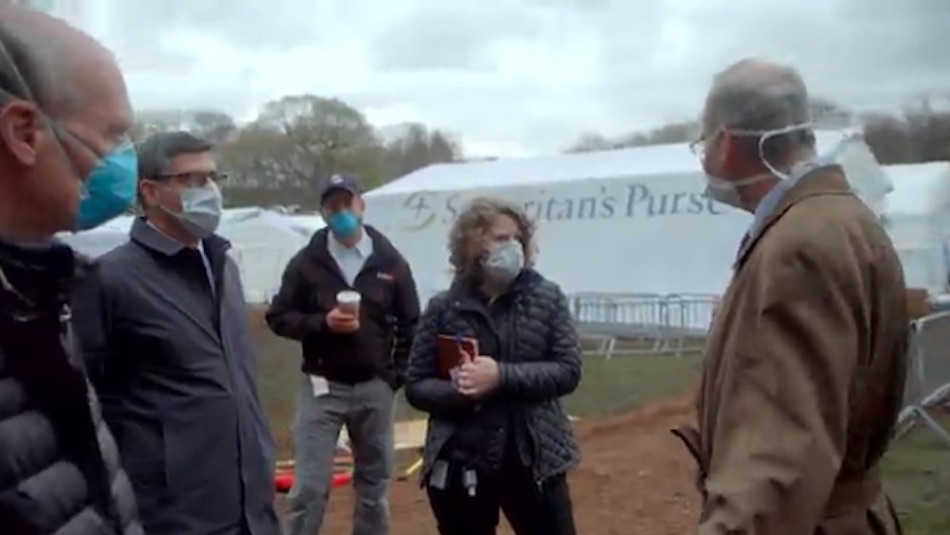 But Ross Murray, the senior director of the GLAAD Media Institute, penned an op-ed in response to the establishment of the field hospital, expressing concerns that medical providers recruited by Samaritan’s Purse could choose to deny treatment to LGBTQ patients if they believed it violated their religious beliefs.

He said he was “not surprised” to hear about the requirement for volunteers to abide by the “Statement of Faith.”

“When Graham claimed Satan is behind LGBTQ rights and advocacy, it signaled his willingness to prevent LGBTQ people from receiving access to coronavirus treatment. He can direct doctors to deny medications to HIV-positive patients, leaving them further at-risk for coronavirus. He may tell his hospital that they must turn away transgender people who come to them in a medical emergency,” Murray wrote.

“As the CEO of a religious institution, Graham can legally instruct his field hospital to turn away LGBTQ people with symptoms, leaving them on their own to find care elsewhere. It’s terrible to think that he would issue such an order, but Graham has long fought for religious hospitals, or even individual staff members, to be able to do just that,” he added.

“During this unprecedented national crisis, Franklin Graham must go on record and clarify that he will not turn away or discriminate against LGBTQ people at his field hospital, and that he will repeal his discriminatory ban on LGBTQ staff members,” Murray concluded. “With COVID-19 disproportionately affecting LGBTQ Americans, our lives may very well depend on it.”

Editor’s note: This story was updated to include additional responses from Samaritan’s Purse and Mount Sinai Hospital.

John Riley is the local news reporter for Metro Weekly. He can be reached at jriley@metroweekly.com
← Previous Story Colorado lawyer who called judge a “gay fat f*g” claims he’s “not a bigot”
Next Story → Gay asylum seeker threatened with beheading in Ghana will have his case reheard