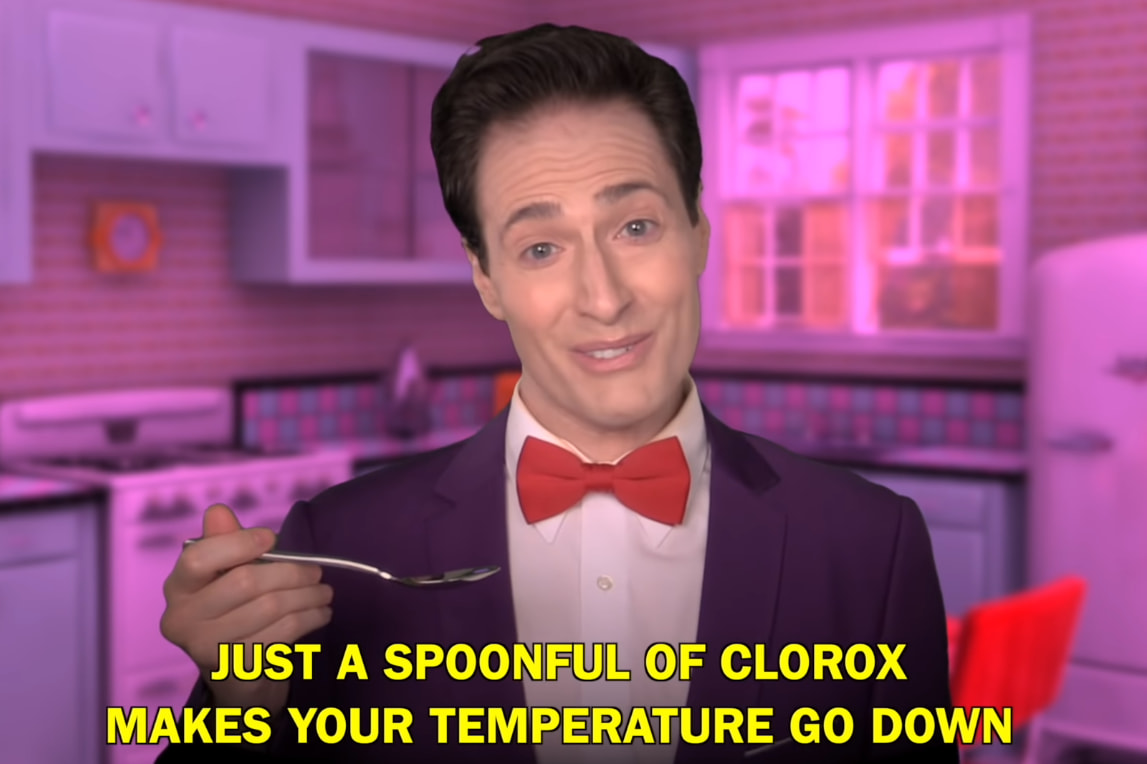 Randy Rainbow has offered up another delightfully brilliant musical parody roasting the Trump administration, this time focused on Donald Trump’s suggestion that disinfectant could be injected into the body in order to fight COVID-19.

“I see the disinfectant where it knocks it out in a minute. One minute,” Trump said during a White House briefing last week. “And is there a way we can do something like that, by injection inside or almost a cleaning?”

He continued: “Because you see it gets in the lungs and does a tremendous number on them, so it’d be interesting to check that.”

Medical experts, disinfectant manufacturers, and countless others have urged Americans not to heed the president’s words and attempt to ingest or inject bleach or cleaning fluids in order to treat COVID-19. Trump later tried to dismiss criticism over the comments by saying they were made “sarcastically.”

Now, Rainbow offers his own take on the scenario with “A Spoonful of Clorox,” a parody of “A Spoonful of Sugar” from Disney’s Mary Poppins, filled with the usual zingers Rainbow has offered in his other parodies.

“A spoonful of Clorox makes your temperature go down,” Rainbow sings. “It’s the latest COVID craze.”

He continues: “A politician who distracts has very little time for facts, the scientists he’s hired are perplexed. While Dr. Birx is ’bout to barf, and hang herself with her own scarf, he diatribes and recklessly prescribes.”

After singing that “some Pledge on your pancakes makes coronavirus pass,” Rainbow tackles Trump’s suggestion that UV light could also be used to tackle COVID-19.

“If it gives you gas, try some bleach in your beer and shove a flashlight up your ass,” he sings. “Heal yourself with UV rays.”

Noting that Trump is “no M.D., he only plays one on TV,” Rainbow offers some handy advice.

“A little Drano in your cup will clear your sinuses right up,” he sings, “and quench your thirst, unless it kills you first.”

Later, he sings: “There’s no vaccine, so try some Mr. Clean.”

Then, because this is our new reality, Rainbow reminds viewers, “Do not actually drink cleaning fluids.”

Watch “A Spoonful of Clorox” below:

HRC President Alphonso David on the legacy of Will & Grace