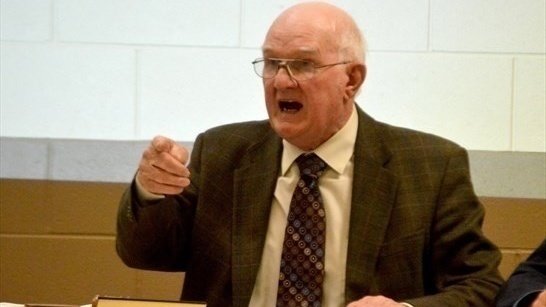 A Canadian mayor has defended saying that gay people will lead to the end of humanity in response to a question about flying a Pride flag.

Bob Currie, mayor of Amaranth, Ontario, made the comments earlier this month during a township council meeting, after a resident asked why Amaranth wasn’t joining other municipalities in visibly supporting LGBTQ Pride Month by flying a Pride flag, CTV news reports.

“It is the duty of council to support ALL members of the Amaranth community, and the lack of support does not go unnoticed by your LGBT+ neighbors, friends, and community workers,” Stacey Whittington wrote in a letter to the council.

“Refusing to fly the flag sends a very strong, outdated, and harmful message to our LGBT+ community, adults, teens, and children that the township and council does not stand up for them, support them, or support human rights and equity,” she continued.

Currie, a devout Christian, responded by suggesting that gay and lesbian people would lead to the end of the human race.

He continued: “So, why would I want to support something when this would be the last generation on Earth? I’m not going to go there.”

The 80-year-old also noted that Amaranth hadn’t flown a Pride flag during any of his 18 years as the township’s mayor.

After hearing Currie’s response, Whittington told CTV that she was “[just] horrified that in 2020, in this township with a large LGBTQ community, that our mayor is saying these things and having them inform his choices as our mayor.”

Jim Waddington, organizer of Orangeville Pride, said Currie’s comments were “disgraceful” and that his “fossil mentality in regards to this type of new world needs to be removed.”

A petition to the township’s Integrity Commissioner calling for Currie to be removed from office has been signed by more than 10,500 people as of press time.

Despite the backlash, Currie refused to apologize for his comments in an interview with CTV News, instead saying that it was “a true statement.”

“If I hurt somebody, that’s their problem, not mine,” he said. “But anyways, I did not say, I don’t say what I do say, okay, to offend people.”

He said that he wouldn’t be stepping down as mayor, despite the petition and public calls for his resignation.

Currie’s daughter, Susan Walkinshaw, told CTV News that her father isn’t homophobic, and said he “would never do something to offend someone or hurt someone.”

Instead, she argued that the mayor, who has served almost two decades in his office, is “not a politician. He speaks the truth. He speaks his mind.”

Rhuaridh Marr is Metro Weekly's managing editor. He can be reached at rmarr@metroweekly.com.
← Previous Story JK Rowling’s anti-trans comments are causing problems for her new book
Next Story → Turkish president accuses ‘sneaky’ gays of poisoning youth, urges people to ‘take a stand’ against them