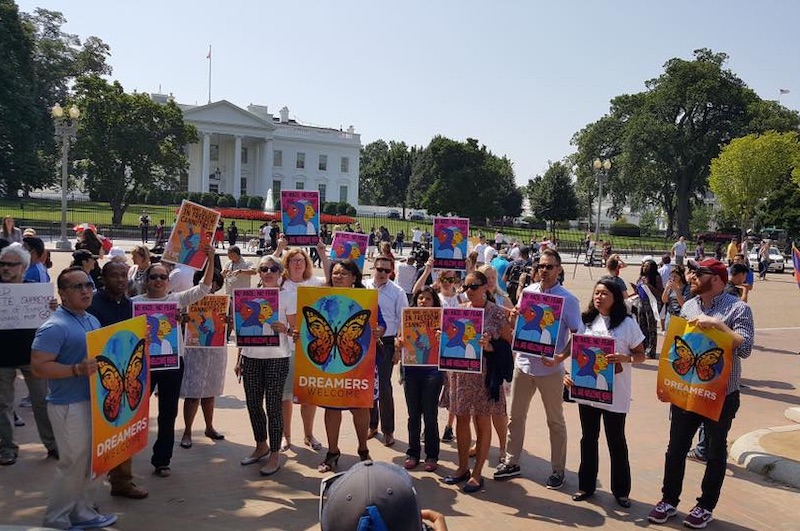 On Thursday, a number of LGBTQ advocates praised the Supreme Court’s decision blocking the Trump administration from attempting to end the Deferred Action for Childhood Arrivals policy for immigrant youth.

The policy, started by an executive order issued by former President Barack Obama in 2012, allows “Dreamers” — immigrants brought to the United States as young children, who have lived most of their lives here, and would be given the opportunity to earn permanent residency through passage of the DREAM Act — to stay in the country without fear of deportation and seek employment.

The legal status the policy grants to Dreamers lasts two years, but is renewable. However, it does not grant them permanent residency, which could only be approved by an act of Congress.

In a 5-4 decision, the high court upheld the program on the grounds that the Trump administration failed to provide an adequate reason to justify scuttling the program, reports The New York Times.

“We do not decide whether DACA or its rescission are sound policies,” Chief Justice John Roberts wrote in the majority opinion. “‘The wisdom’ of those decisions ‘is none of our concern.’ We address only whether the agency complied with the procedural requirement that it provide a reasoned explanation for its action.”

Justice Clarence Thomas, writing the dissent on behalf of the minority, argued that the court’s decision was politically motivated, and that any fix to allow DACA recipients to stay in the country was the responsibility of the legislative branch.

“Today’s decision must be recognized for what it is: an effort to avoid a politically controversial but legally correct decision,” Thomas wrote, arguing that the court “has given the green light for future political battles to be fought in this court rather than where they rightfully belong — the political branches.”

The court’s ruling means that the administration will have to provide a lower court with a more robust justification for ending the DACA program — a process that could take months, and could potentially be delayed until after the November election, or even upset by it, if the president loses re-election. It also halts any attempts by the administration may have tried to take to deport those DACA recipients.

LGBTQ groups praised the decision, noting that a fair number of DACA recipients are themselves LGBTQ — and could perhaps even be placed in mortal danger if shipped back to homophobic countries of origin, where they may not speak the language, have any familial ties, be able to find work, or live free from harassment and discrimination.

“Today, the Supreme Court put a speed bump in the road for Trump’s attempt to use the lives of undocumented immigrants to drive his nationalist agenda. The Supreme Court did the right thing by upholding the right of hundreds of thousands of DACA recipients, many of whom are LGBTQ, to stay in the U.S. to work, attend school and be protected from deportation,” Rea Carey, the executive director of the National LGBTQ Task Force, said in a statement.

“Today the Trump administration has been reminded that it too is subject to the law,” she added. “We must now redouble our efforts to get out to vote to ensure that fair-minded people are elected in November across the country.”

“Today’s decision blocking the Trump administration’s attempt to tear apart immigrant families is wonderful news, and we celebrate with the thousands of DACA recipients who have relied on the program to live and be safe in this country,” Kevin Jennings, the CEO of Lambda Legal, said in a statement. “But the work continues to ensure all immigrants are protected from multiple harmful actions by this administration, which has once again been rebuked by the Supreme Court for its failure to follow the rule of law. 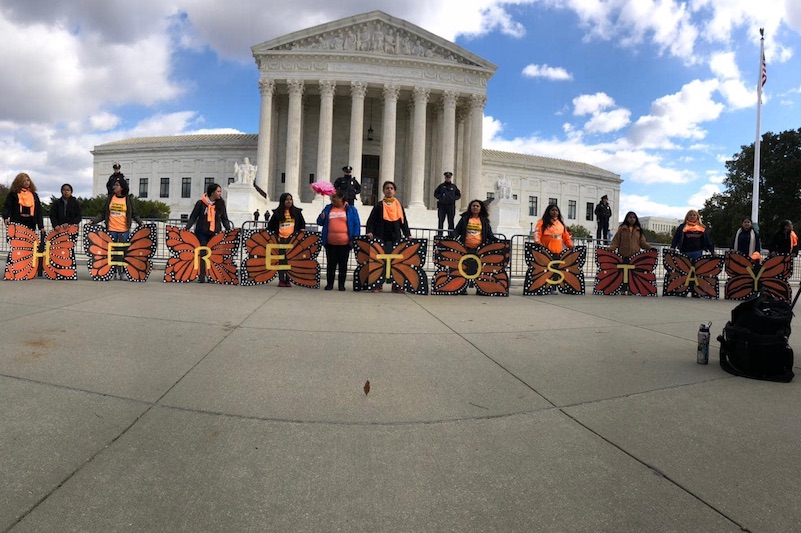 Immigration advocates demonstrate on the steps of the Supreme Court – Photo: United We Dream, via Facebook

“Immigrant families are part of every community, including the LGBTQ community, and Lambda Legal will continue to resist the racist and xenophobic immigration policies of this administration,” Jennings added, calling on the U.S. Senate to pass the American Dream and Promise Act, a fix to the DACA program that the Republican-led chamber blocked last year. “We will keep pushing for comprehensive and compassionate reform to our immigration system as whole.”

“The U.S. Supreme Court has not only given 700,000 DACA recipients a chance to remain in the only home they have ever known, but has sharply rebuked the Trump Administration’s ongoing efforts to demonize and hurt hard-working immigrant families,” Monica Trasandes, GLAAD’s Director of Spanish-Language and Latinx Media and Representation, said in a statement. “GLAAD celebrates this victory with Dreamers, their families and their tireless legal teams and advocates. We recognize the undeniable contributions they make to American life and will continue to fight for their opportunity to fully participate in and enrich our society and culture.”

The Campaign for Southern Equality, also issued a statement praising the decision.

“Today’s ruling from the U.S. Supreme Court is a critical step forward in protecting young immigrants who are DACA recipients. Immigration rights is a human rights issue and a LGBTQ issue, and LGBTQ Southerners join our partners in solidarity in this fight,” the Rev. Jasmine Beach-Ferrara, the executive director of the Campaign for Southern Equality, said. “According to estimates from the Williams Institute at UCLA Law School, more than 75,000 of the young people known as DREAMers are also a part of the LGBTQ community. Over 36,000 of these LGBTQ DREAMers have participated in DACA.

“Let’s also acknowledge that this step is just one of so many reforms needed in the United States, and we remain committed to this month’s deepened and long overdue conversation around supporting Black lives, opposing police brutality, and dismantling white supremacy,” Beach-Ferrara added. “The reality is that Southerners with multiple marginalized identities face multiple layers of oppression — and so just as we demand justice for LGBTQ Southerners, and just as we demand justice for undocumented immigrants, we continue the call for dignity, respect, and equality for ALL LGBTQ people, no matter their race, religion, country of origin, HIV status, or disability status.”

United Nations calls for an end to “cruel, inhuman, or degrading” conversion therapy