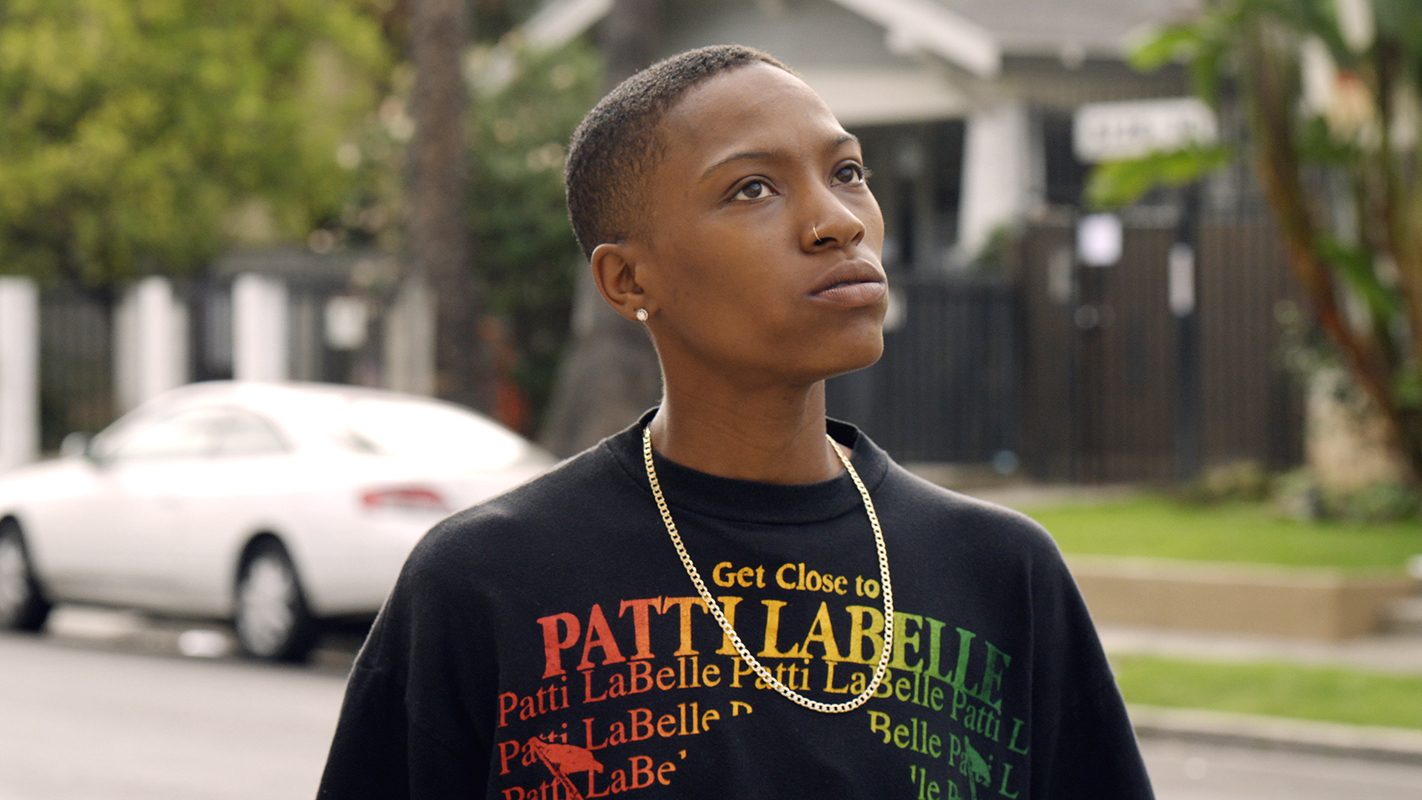 “It’s a revolution.” Jonica “JoJo” T. Gibbs, star of BET’s smooth, single-cam comedy Twenties, could be referring to the new wave of queer black talent gaining power in Hollywood, including herself and the show’s Emmy-winning creator Lena Waithe (Master of None and The Chi). But, on this day, she’s talking about how eight minutes and forty-six seconds of brutality in Minneapolis, captured on video, sparked a movement that’s filled the streets and inspired change. “It’s happening all over the world. And that’s the beautiful thing about humans. At the end of the day, most of us can fathom up some sort of empathy, unless you’re just heartless.”

In Twenties, Gibbs has put her heart into portraying Hattie, a lesbian aspiring screenwriter living in L.A., based loosely on Waithe. Hattie is a witty truth-teller, a “masculine-presenting stud” who keeps her sneakers looking fresh, but often lets her relationships and finances get messy. She is not unlike many eager twentysomethings.

“I would say it’s pretty head-on on a couple things,” says Gibbs, relating Hattie’s struggles to her own not so long ago as a comedy hopeful, and former substitute teacher, from the Carolinas. “For instance, being broke. I was definitely broke.

“Unlike Hattie,” she continues, “I had a great relationship with my landlord. I was behind three months on rent at one point, and he was very understanding. He was very much my angel on earth. We created a payment plan and he let me have time to pay it back. Hattie’s landlord wasn’t playing. She was like, ‘Nah, I’m putting your stuff onto the sidewalk.’ Drinking her little coffee, like, ‘Yes, and I’m going to watch you suffer from up here.'”

“I did stay on my best friend’s couch while she and her boyfriend lived in Koreatown,” recalls Gibbs, noting another chapter in Hattie’s story that seems written for her to play. “I didn’t get settled in like Hattie did, though. I only was there for a month, and then I was like, ‘All right, you’re a couple, I’m going to give you guys your space.’ But yeah, I was all over the place. Unlike Hattie I was not as confident in myself, in my sexuality, who I wanted to present to the world when I was at that age. I was blossoming. But I didn’t have that same confidence that she had at that time.”

While Gibbs credits her mom with helping her nail down her own place, Hattie relies on friends Marie and Nia (Gabrielle Graham), a former child actress turned yoga instructor, to have her back in a number of jams.

The trio carries the show’s multi-faceted take on sisterhood, singlehood, and getting ahead in Hollywood. And the matter-of-fact depiction of Hattie’s strong friendship with her two straight besties adds yet another element distinguishing Twenties‘ worldview. 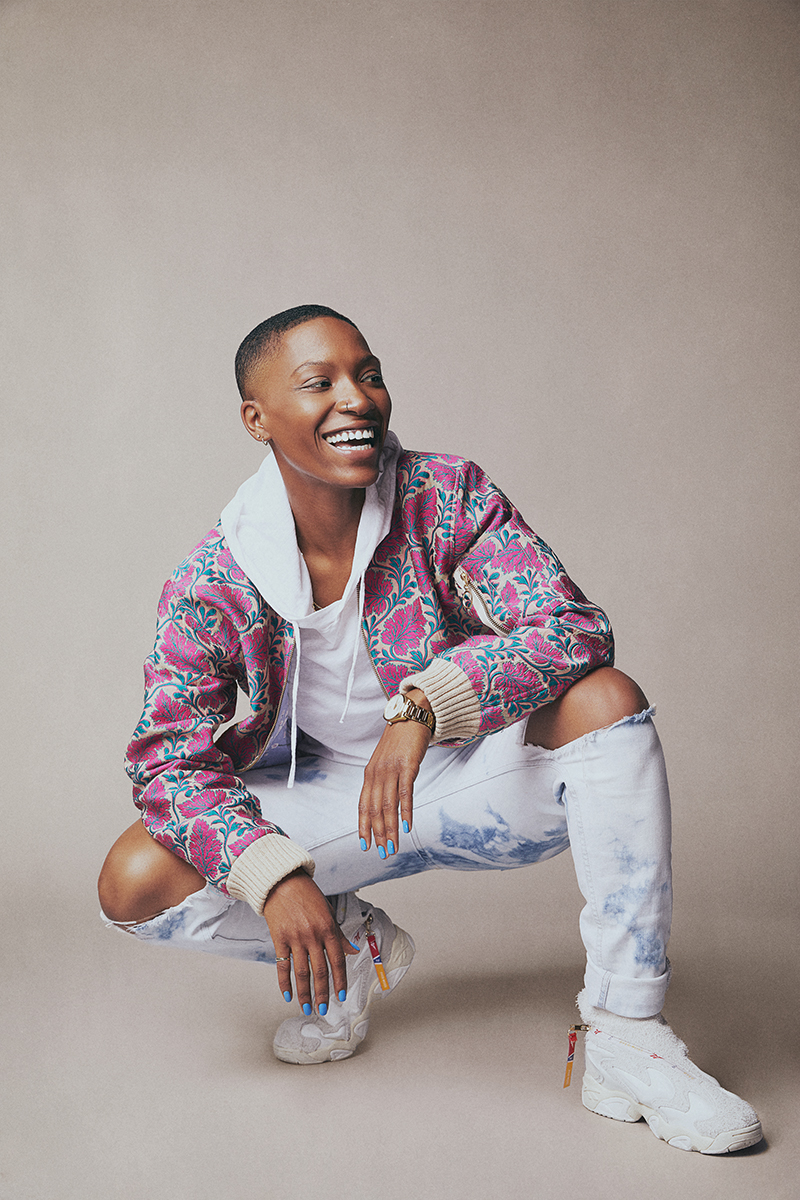 “I love that Lena did that because that’s my reality as well,” says Gibbs. “I heard Lena talk about it and I know that that’s her reality. Generally on television, gay characters are presented as the sidekick. Or if it is a show with gay characters, then all the characters are gay. [But] it’s not always that we just link up together like that. I think that it’s dope that Lena showed the perspective of a gay character who hasn’t necessarily found her space in that regard or wants to. It’s not necessarily discussed on the show, but I mean, I think that she gets what she needs from her friends. They just so happen to be straight and that’s not even a factor that clearly is significant enough for any of them to consider in terms of what they want in a friendship. I think that’s the most important thing.

“Personally, I don’t care who anybody is having sex with. I look at a person’s qualities, their intelligence, what do they add to my life? That type of thing. Because, at the end of the day, it’s nobody’s business who’s in somebody’s bed. I think that you should just choose people to be in your life based off of the quality of their character. I think that the show shows this, and it shows a different dynamic of friendship that spans beyond the obvious, which would be sexuality or gender or race or anything like that. I mean, they are three black women, however, their relationship isn’t contingent upon who they’re dating. It’s just contingent upon how they treat each other.”

The adventures of Hattie, Marie, and Nia have hit home with the show’s audience, who have responded enthusiastically. “I have got nothing but great feedback,” says Gibbs. “It’s crazy because the range of people that watch the show is so broad. I have older women hitting me up, teenagers, it’s been really dope. I think that the storyline is interesting and the fact that it’s called Twenties — that’s a decade that either you’ve been through or you’re really, really looking forward to going through it, or you’re in it currently. So, it’s relatable, and people have been receiving the show very well.”

From its sexy opening scene, set to the orchestral fanfare of All About Eve, the series combines relatability with a romantic portrayal of living the Hollywood dream — or at least hustling to achieve it.

The eclectic soundtrack adds a dash of Insecure-style black boho chic (along with the presence of Elmore, who’s featured prominently on season four of that HBO hit), but this show’s comedic voice seems all its own. It should come as no surprise that Gibbs, who’s been doing standup for five years, takes the laughter seriously, especially right now.

“I think that comedy is a healing form of expression,” she says. “Not only for comics, but for the people receiving the laughs and the enjoyment of whatever story that’s being told. As a comedian, I understand that generally most of the content that I do onstage probably comes from a place of, at that time it was probably some type of negative emotion going on, either frustration, anger, or feeling unsafe, or whatever the case may be. But I think that people of color — and black people, especially — have a way of turning shit into sugar. And being able to make the most out of a bad situation and a lot of times we can do that through laughter. I know that that’s definitely one of my healing mechanisms. One of the ways that I’ve dealt with trauma throughout my entire life is…recognizing that throughout life we have experiences, and you can take from it what you will, and you can use it to your best regard to heal people, and to heal yourself as well.”

Twenties airs on BET (check local listings), and is available for streaming or rental on Prime Video, Vudu, Youtube, and Google Play.

André Hereford covers arts and entertainment for Metro Weekly. He can be reached at ahereford@metroweekly.com. Follow him on Twitter at @here4andre.
← Previous Story Simon Says Spinoff: Love, Victor (Review)
Next Story → Spotlight: Submission Possible on Revry