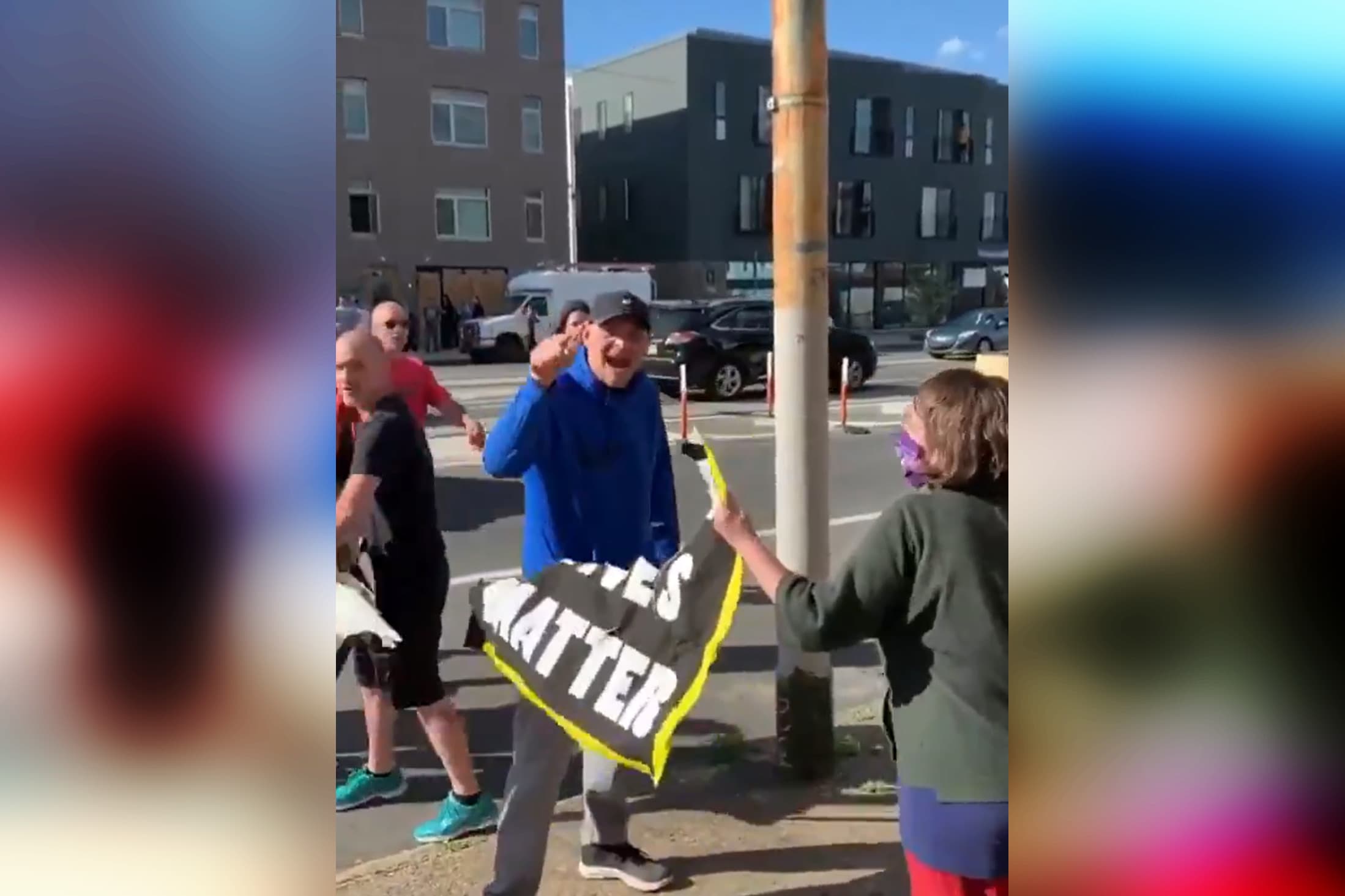 A member of the group, demanding that Black Lives Matter protesters leave the area

A group of white men in Philadelphia attacked people protesting the death of George Floyd and told them to “take that fucking faggot energy and go somewhere else.”

The men were members of a much larger group — PBS affiliate WHYY said it was roughly one hundred people — that roamed Philadelphia’s Fishtown neighborhood on Monday, June 1 carrying baseball bats and other weapons.

In a video posted to Twitter, which has been viewed more than 660,000 times, a few of the men approach a group of people carrying a Black Lives Matter sign, LGBTQ Nation reports.

In the video, the men claim that they are protecting police officers because they “can’t defend themselves.”

One man says, “Anyone who wants to throw shit at a cop, or pick on a cop, pick one of us the fuck out and we’ll go around the corner and fight you, one on one.”

“Take that fucking faggot energy,” he shouts, pausing as another man grabs at the Black Lives Matter sign from the protesters, tearing it.

He continues: “Take that fucking faggot energy and go somewhere else.”

Meanwhile in #Philly: my friend shot this video of assholes threatening protestors and "defending the cops" … stay safe bbz. 🙄 pic.twitter.com/u1KEtkPipy

Protesters in Philadelphia’s Center City neighborhood were tear-gassed by police on Monday after they blocked traffic on the I-676 expressway. Police claimed that the protesters threw bottles and rocks at officers, and dozens were arrested and detained after the crowd disbursed, WHYY reports.

Meanwhile, the white men in Fishtown were reportedly unimpeded by police, despite carrying bats, golf clubs, and billy clubs, and with one man even videoed holding an axe.

Videos show the men being escorted by police while walking through Fishtown, with ABC6 reporter Christie Ileto noting that they were out “an hour and a half past curfew,” which was 6 p.m.

Minnesota Democratic Congressional candidate Johnny Akzam shared Ileto’s footage and said there was “quite the double standard going on in Fishtown.”

“It seems white vigilantes can walk around armed with baseball bats and who knows what else while protesters are reviled and treated like criminals,” Akzam said. “What’s different about that crowd? You see it?”

Looks like quite the double standard going on in Fishtown.

It seems white vigilantes can walk around armed with baseball bats and who knows what else while protesters are reviled and treated like criminals.

What's different about that crowd? You see it?pic.twitter.com/qWQsawNIMQ

According to WHYY producer Jon Ehrens, the white men were overheard using the “n-word,” with one man reportedly saying, “I’m ready to fuck shit up. You know, I’ve been looking for a fight for the past 6 months.”

Ehrens tweeted that another man told a police officer that he was “not here to make your job harder. I want to protect you.”

A third man wearing a Donald Trump hat allegedly raised his fist and greeted his friend by saying, “White man!”

huge congregation of agitated white people with bats, golf clubs and billy clubs. n-words flying. overheard: “I’m ready to fuck shit up. you know ive been looking for a fight for the past 6 months.” pic.twitter.com/UHOTWMSWDT

Ehrens later said that he was attacked while filming the men, saying they “beat the shit out of me.”

“I got called out for recording them and they beat the shit out of me and pushed my girlfriend,” Ehrens tweeted. He later posted from a hospital bed saying he was okay.

Protests against racism and police brutality have been taking place in cities nationwide after the death of George Floyd last week, a black man who was killed after a white Minneapolis police officer knelt on his neck for almost nine minutes.

More than 4,400 people have been arrested at protests, including protesters, journalists, and bystanders, after police engaged in brutal tactics to clear out crowds, including firing tear gas and shooting rubber bullets.

CNN contributor Keith Boykin said that he was arrested while documenting a protest march in New York City, despite identifying himself as a member of the press.

The gay journalist and broadcaster said that police have “way too much power,” adding that they “actually don’t de-escalate, but they make matters worse, and that’s what people are protesting about.”

Rhuaridh Marr is Metro Weekly's online editor. He can be reached at rmarr@metroweekly.com.
← Previous Story Keith Boykin says police have “too much power” after arrest while documenting protest
Next Story → D.C. and Maryland LGBTQ candidates largely fall short in primary elections