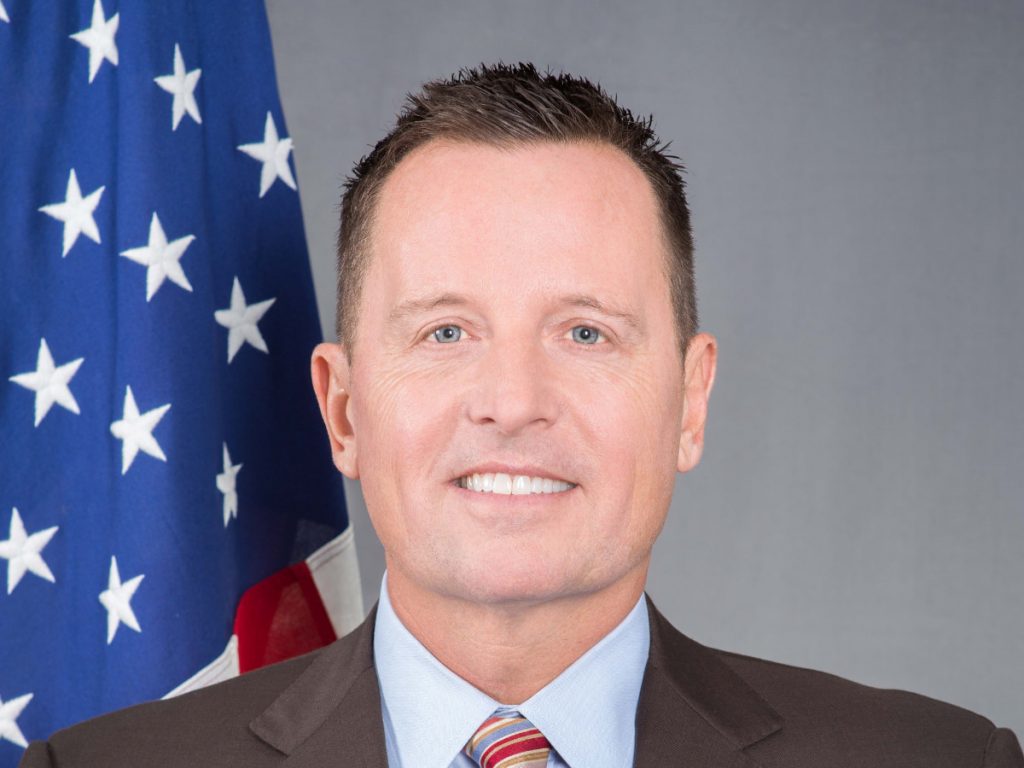 Richard Grenell, who was, until recently, the highest-ranking openly gay appointee in Donald Trump’s administration, went on a twitter tirade against the LGBTQ Victory Fund and Democratic presidential candidate Joe Biden.

Grenell, who previously served as U.S. ambassador to Germany and then as Acting Director of National Intelligence, becoming the first out LGBTQ person to serve in a cabinet-level position, is best known for his unfailing support of President Trump and sharp-tongued responses to political opponents on Twitter.

During his stint in the Trump administration, which ended last month, Grenell was tasked with leading an initiative aimed at encouraging other countries, particularly those in Africa, the Middle East, and the Caribbean, to repeal laws criminalizing homosexuality or punishing same-sex relations with prison sentences or death. He has also been one of several prominent Republican voices who frequently defend the Trump administration’s record on LGBTQ rights.

On Sunday, Grenell took offense at an ABC News story about the LGBTQ Victory Fund’s efforts to elect LGBTQ candidates to public office. In that story, a recent report by the Victory Fund stated that 22,544 additional LGBTQ people would have to be elected just in order to comprise 4.5% of all elected officials, which is the percent of overall Americans who identify as LGBTQ.

Although the statistic cited in the ABC News tweet only refers to representation in terms of proportionality, and the article said nothing about the partisan affiliation or alleged ideological similarity of the 22,544 hypothetical LGBTQ officials, Grenell tweeted: “This thinking is dangerous and offensive because it assumes all gay people think alike. Gay is NOT an ideaology (sic).”

This thinking is dangerous and offensive because it assumes all gay people think alike.

Gay is NOT an ideaology. https://t.co/tQZWZEJgfj

Grenell then accused the Victory Fund of failing to support LGBTQ Republicans, pointing to its non-endorsement of Carl DeMaio, a former San Diego City Council member who ran for Congress as a Republican in 2014.

While the organization did not endorse DeMaio’s congressional bid, it did endorse two other gay Republican candidates that year: Dan Innis of New Hampshire and Richard Tisei of Massachusetts.

“Why didn’t you endorse @carldemaio? You should have to explain this to the IRS,” Grenell tweeted.

Why didn’t you endorse @carldemaio? You should have to explain this to the IRS. @IRStaxpros https://t.co/FjFaKKC4tY

DeMaio himself weighed in, attacking Victory Fund President and CEO Annise Parker, and claiming that Victory Fund is “hyper-partisan in all its actions.”

In that tweet, DeMaio alleged that Victory Fund hosted his opponent — U.S. Rep. Scott Peters (D-Calif.), whom DeMaio says used gay-baiting tactics against him in 2014 — at an event in his district. (Parker herself did not take over the helm of Victory Fund until 2018.)

.@AnniseParker Stop lying – Victory Fund claims to be non-partisan, but it is hyper-partisan in all its actions. In '14 you hosted my gay-baiting Democrat opponent at an event you organized in my district. You worked against the gay candidate in a top-tier race. #TrueColors https://t.co/U2uZ8uXib4

But Sean Meloy, the political director of the LGBTQ Victory Fund, responded to Grenell’s tweet, claiming that DeMaio never asked for or applied for an endorsement, tweeting: “Easy – He didn’t apply. That’s the first step when asking for an endorsement normally. Thanks for unnecessarily targeting a Political Action Committee though!”

Easy – He didn't apply. That's the first step when asking for an endorsement normally. Thanks for unnecessarily targeting a Political Action Committee though!

Two of the biggest points of contention with the LGBTQ Victory Fund, from the perspective of LGBTQ conservatives, are that an overwhelming majority of its endorsed candidates have sought office by running as Democrats.

Parker addressed these concerns in a recent interview with Metro Weekly. She insisted that Victory does make endorsements of Republicans who apply for an endorsement and meet their criteria, but noted that a number of Republican LGBTQ officeholders, particularly at the local level, end up running for and winning offices that are technically nonpartisan positions.

Noting that the number of out elected transgender, intersex, two-spirit, and nonbinary individuals currently outnumbers the number of self-identified Republicans, based on statistics from the Victory Institute’s website “Out for America,” Parker told Metro Weekly that LGBTQ people of any partisan affiliation are welcome to take part in candidate trainings offered by the Victory Institute (the organization’s educational arm).

However, she added, Victory Fund endorsements are only given to LGBTQ individuals who are fully “out” as LGBTQ, fully support transgender inclusion when it comes to promoting LGBTQ rights or legislation, and can say they are at least nominally “pro-choice,” in the sense that they believe in some level of a right to privacy. Candidate viability is also taken into account when deciding whether to endorse.

“Candidates have to believe in some level of a right to privacy, which includes the right to abortion. Some of our candidates only believe in it after rape and incest, all the way to others who support the full Planned Parenthood position,” Parker said.

But many Twitter users sympathizing with Grenell criticized that stance, saying that Victory cannot be a nonpartisan organization because almost no Republicans seeking office are pro-choice these days.

“‘We endorse pro-equality, PRO-CHOICE GOP candidates.’ There’s their built-in excuse right there,” tweeted one user. “Those really don’t exist anymore. What does LGBTQ have to do with abortion? Wouldn’t they want LESS abortion, because that means more adoption options?”

However, defenders of Victory Fund’s position argue that the right to privacy and support for reproductive access are essential to LGBTQ rights because those two concepts form the legal basis for LGBTQ people to form families — whether through surrogacy or adoption — without government interference or unnecessary burdens.

Grenell also attacked former Vice President Joe Biden, the presumptive Democratic nominee for president, over past remarks Biden made during his years in the Senate, sharing a 2006 video clip from Meet the Press that has been circulating on social media, in which Biden stated his opposition to marriage equality.

The tweet also referenced another statement from 1973 in which Biden said that his “gut reaction” was that homosexuals were security risks.

“Gay people are not security risks. Joe Biden said we were,” Grenell tweeted. “I’m grateful @realDonaldTrump made history with his views on gays and security clearances.”

Gay people are not security risks.

Joe Biden said we were.

I’m grateful @realDonaldTrump made history with his views on gays and security clearances. @rwgreer https://t.co/WAANtpq2NW

While Trump has said he is supportive of same-sex marriage, his stance on gays being able to obtain security clearances was hardly groundbreaking for a president. Rather, it was President Bill Clinton (D) in 1995 who issued an executive order barring the federal government from denying security clearances to gay and lesbian individuals solely on the basis of their sexual orientation.

The assertion that Biden still opposes same-sex marriage is also incorrect, as he reversed his earlier position when he came out in favor of same-sex marriage during a 2012 appearance on Meet the Press, saying he was “absolutely comfortable” with the idea. Biden’s comments were widely considered a “gaffe” by a Washington press corps that breathlessly reported on the Obama administration’s stumbles as it tried to navigate a thorny issue.

Biden’s comments were also credited with forcing then-President Obama’s hand and prompting him to become the first sitting president running for re-election to back same-sex nuptials a few days later.

That very position was considered controversial at the time, sparking a slew of “gloom-and-doom” stories about how Obama’s support for marriage equality could potentially harm his re-election bid by alienating socially conservative voters, especially in the South. Following Obama’s successful re-election, Biden was elevated to near-hero status among some left-leaning members of the LGBTQ community, often being asked to address gay donors or big-ticket galas like the Human Rights Campaign’s National Dinner.

Biden, who was in elective office from 1973 to 2017, has a mixed record on LGBTQ issues, often moving to the left on LGBTQ issues over his almost five decades in office. In 1993, Biden voted for a defense bill containing an amendment to implement the military’s now-defunct “Don’t Ask, Don’t Tell” policy, although he had previously voted, unsuccessfully, with a minority of senators to remove the amendment from the bill. He later supported the policy’s repeal as vice president in 2010. Biden also voted for the 1996 Defense of Marriage Act which refused to grant federal recognition to same-sex marriages, thus rendering LGBTQ people ineligible for various marital benefits.

See also: Joe Biden: Where does he stand on LGBTQ rights?

In his later years, Biden has come out in favor of the Equality Act, which would extend nondiscrimination protections in federal civil rights law to LGBTQ individuals — having previously supported in the 1990s as a senator, the Employment Non-Discrimination Act — as well as bills to combat anti-LGBTQ bullying in schools and restrict the use of religious freedom being used as a justification for discrimination. It is unclear whether he ever apologized for his statement that LGBTQ people might constitute “security risks.”

Grenell’s line of attack, which has been echoed by gay and straight Republicans alike on Twitter, repeats a line of attack that exposes the former vice president’s vulnerabilities among left-leaning constituencies within the Democratic Party.

By exposing a potential rift in that support, Biden’s past anti-LGBTQ statements could be trumpeted and used to convince voters who aren’t inclined to vote for President Trump to vote for a third-party, write in a protest vote, or refuse to cast a ballot altogether. (A similar strategy, highlighting other issues like trade and support for regime-change wars abroad, was employed by the GOP in 2016 against Democratic nominee Hillary Clinton.)

Some of the Democratic-leaning groups where the level of support for Biden is weaker include progressives who backed U.S. Sen. Bernie Sanders (I-Vt.) in the primary, LGBTQ individuals, and younger voters, particularly those who don’t get their news from traditional media outlets and may thus be unaware of Biden’s political evolution over the years, or may be uncertain of where he stands on various issues including, but not limited to, LGBTQ equality.

Any reduction in the number of “non-Trump” voters in the electorate — or any increase in the number of non-Trump voters who participate but refuse to cast a ballot for Biden — increases the chances for Trump to win key swing states, and thus the presidency, without having to win over Democratic-leaning constituencies or, in some closely-contested states, even a majority of the popular vote.

John Riley is the local news reporter for Metro Weekly. He can be reached at jriley@metroweekly.com
← Previous Story Trump administration tells homeless shelters how to identify and deny access to trans women
Next Story → White nationalist group marches in Pennsylvania, yelling “F*** the Gays!” and racial slurs