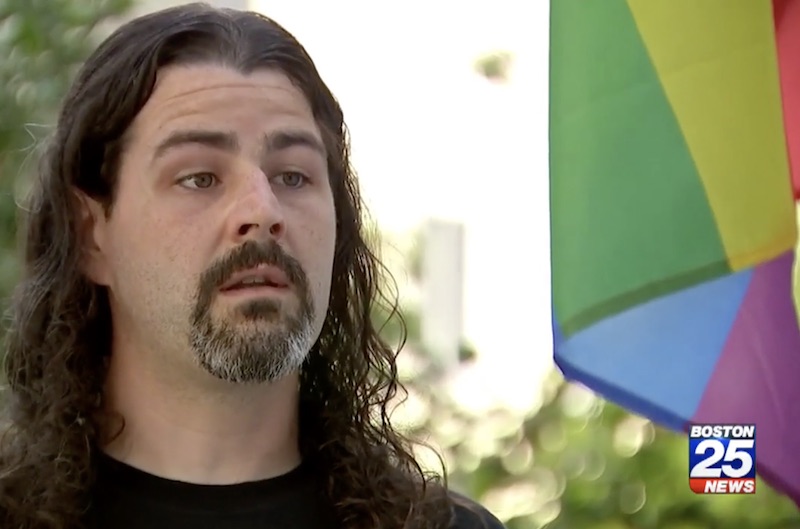 A Massachusetts gay man claims he was attacked by a stranger in a possible hate crime after he and his husband flew an LGBTQ Pride flag in their front yard.

Tom Anderson, of Taunton, says he and his husband of nine years, Jacob, hung up a Pride flag in their front yard. An hour later, a man in a car stopped on the road by their house, jumped out, and approached them.

“I was kind of in a state of disbelief, like really, I’m in my own yard,” Anderson told FOX affiliate Boston 25 News.

Anderson claims the man swore at him, called him a slur, and punched him in the face. He then returned to his car and sped off.

“I saw the guy just come up and yell those nasty words at my husband and then hit him two or three times and then took off back into his car and screeched away,” Jacob Anderson says. “It’s definitely a hate crime just based on the words he used.”

Tom Anderson lost his two front teeth in the attack and needed several stitches afterwards. Another person passing by stopped to help them after the attack. They then called police and gave a description of the attacker and his car.

“I’m more worried about him getting away with it and thinking, ‘Okay, this is okay to do,'” Tom Anderson says.

The couple says they’ve received gifts, including a home security system, from friends and strangers, and are grateful for the support of their fellow community members in the wake of the attack.

“The community’s been amazing, family, friends, city of Taunton, our workplaces, have been so helpful,” says Jacob Anderson.

Tom Anderson says he’s not going to be deterred from flying the Pride flag in the future.

“I want to just keep it up all year long now,” he says.