12 Great Things To Do in DC This Week

From Capital Pride's #StillWeLaugh to Commissary's Bottomless Brunch, here's our handpicked recommendations for your week! 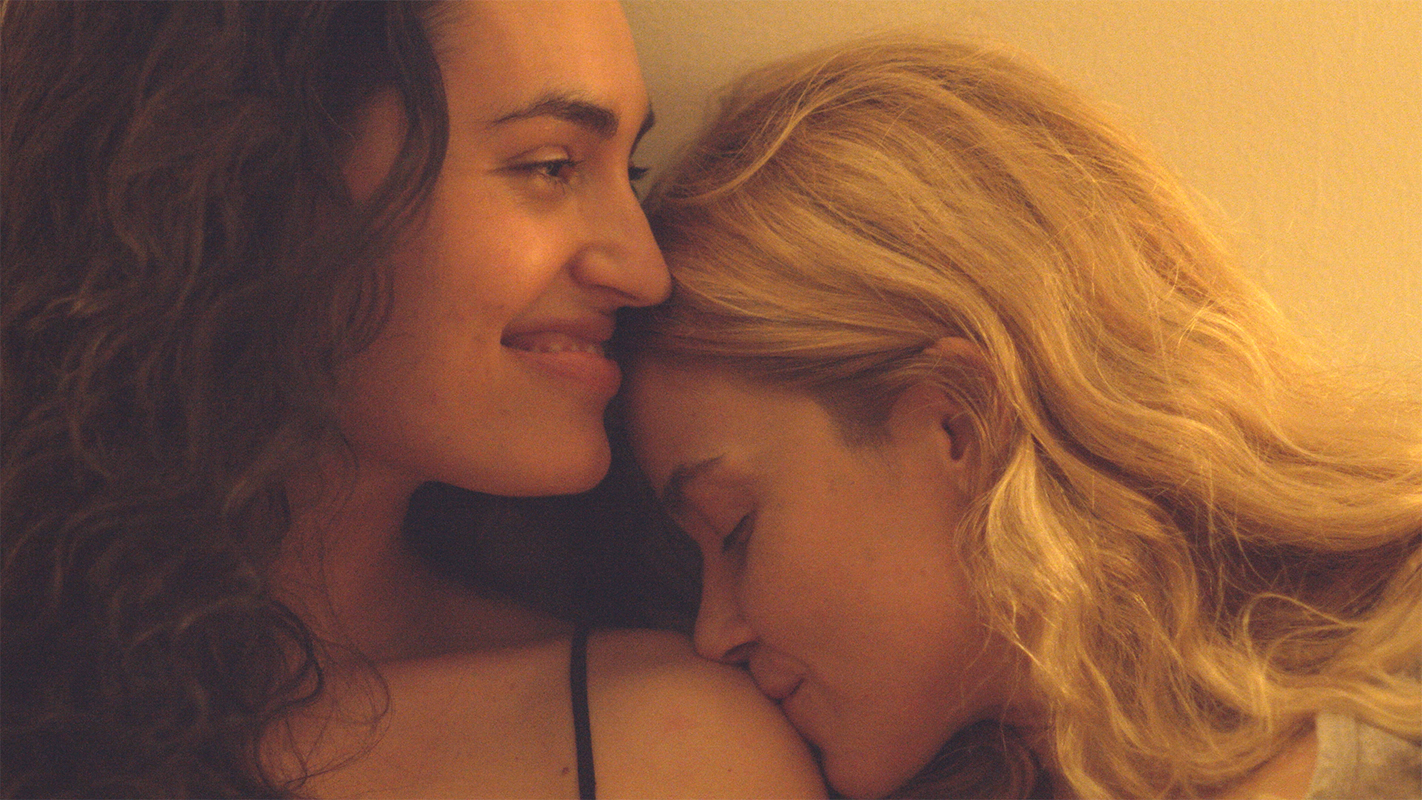 Gay Olive and her straight best friend Billy are busy New Yorkers in hot pursuit of love — who share what they see and do along the way in recorded voicemail messages to each other. Created by budding writer-director Erin C. Buckley, PLATONIC is a new 10-episode web series set in what is described as “a memory of New York City just before the pandemic.” A YouTube exclusive starring Summer Spiro as Olive and Ryan King as Billy, the series is notable for the way “[it] juxtaposes the radical intimacy and hazy boundaries of non-romantic relationships with the sexual fluidity and emotional ambiguity of modern dating.” PLATONIC launches with “Episode 1: Phone Tag” on Wednesday, Aug. 12. Visit www.platonicseries.com.

In partnership with the DC Center, the Capital Pride Alliance has been overseeing a multi-episode web series created as an alternative to the organization’s usual June festivities. It’s showcasing some of the key people and places that make the local LGBTQ community so rich and rewarding. Available for streaming from @CapitalPrideDC on Facebook and YouTube, Pride In The City launched in late June with #StillWeEntertain, featuring performances by Shi-Queeta Lee, Willie J Garner, Manuex Pop, MzzAmirraO, the Canales Brothers, Destiny B. Childs, Billy Winn, and KC B. Yoncé. The series continues with #StillWeLaugh, a showcase of area comedians and their standup routines. Violet Gray, Jake Leizear, Dana Lollar aka D-Lo, Franqi French, Valerie Paschall, Kevin McLain, and Jake Jacob are featured in the episode, which debuts Friday, Aug. 7, at 7 p.m. Visit www.capitalpride.org.

A total of 17 theater companies and more than 50 artists will team up in creative collaborations led by Rorschach Theatre Company, joined this year by representatives from 1st Stage, Arena Stage, Mosaic Theater, Pointless Theatre, Round House Theatre, Spooky Action Theatre, and The Welders. Named after a childhood game that later inspired Hermann Rorschach’s famous Inkblot Test, Klecksography embraces the metaphor of that test by instructing all participating artists to create new works inspired by the same artistic source: the 51st State Murals project, those D.C.-centric murals that went up in various parts of town in late June in honor of the vote for D.C. statehood by the U.S. House of Representatives. #Klex2020 will result in 10 new short plays and six short films showcasing the talents of some of D.C.’s best emerging artists, working together in assorted teams. Premieres Sunday, Aug. 9, at 7 p.m. The video will remain available on YouTube through Aug. 16. Pay-What-You-Can donations are encouraged. Visit www.rorschachtheatre.com or www.bit.ly/klex2020. 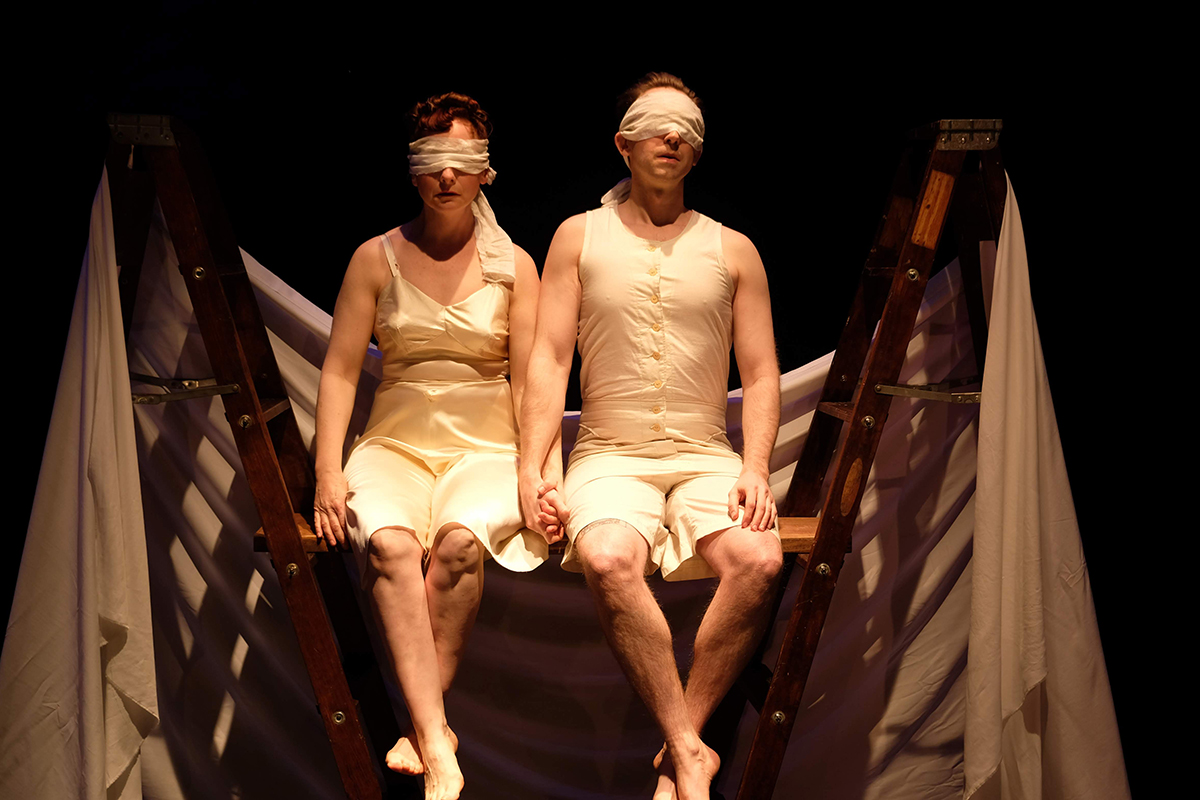 Last spring, Happenstance Theater premiered Pantheon, a new work of devised theater from the Helen Hayes Award-winning ensemble that incorporates themes and characters from ancient Greek mythology. Sharon Crissinger captured a performance of the stage production that the company is now offering as a video rental. Set in the 1940s, Pantheon revolves around a chorus of factory workers brought to life by Happenstance’s married co-founders Mark Jaster and Sabrina Mandell along with Gwen Grastorf, Sarah Olmsted Thomas, and Alex Vernon. “With an ample smattering of amusement,” reads the official description, “the performers invoke the Muses, offer Sacrifice, suffer Hubris, consult Oracles, and meet Fate as they portray an array of mortals and Gods whose flaws reflect their own.” Through Aug. 30. Rentals are $10 for a 30-day streaming period. Visit www.vimeo.com/ondemand/pantheon.

Last week ushered in the launch of a biweekly digital series focused on artists touted as “the past, present, and future of Signature Theatre.” The region’s preeminent musical theater purveyor kicked off its newest production with a half-hour episode starring several of its most popular showstoppers, including Nova Y. Payton (Ain’t Misbehavin’, Hairspray), Natascia Diaz (Passion), and Heidi Blickenstaff (Disney’s Freaky Friday), while also featuring one of Broadway’s leading contemporary composers, Tony winner Tom Kitt (Next to Normal). Offering a mix of performances and interviews, the inaugural edition of The Signature Show had talent to spare, a packed lineup also including Emily Skinner, Inés Nassara, Christiane Noll, DeWitt Fleming Jr., Jacquelyn Piro Donovan, and Jennie Harney-Fleming, plus a tribute to music director and composer Darius Smith. Episode 1, released July 30, is currently available at www.bit.ly/sigshow1. 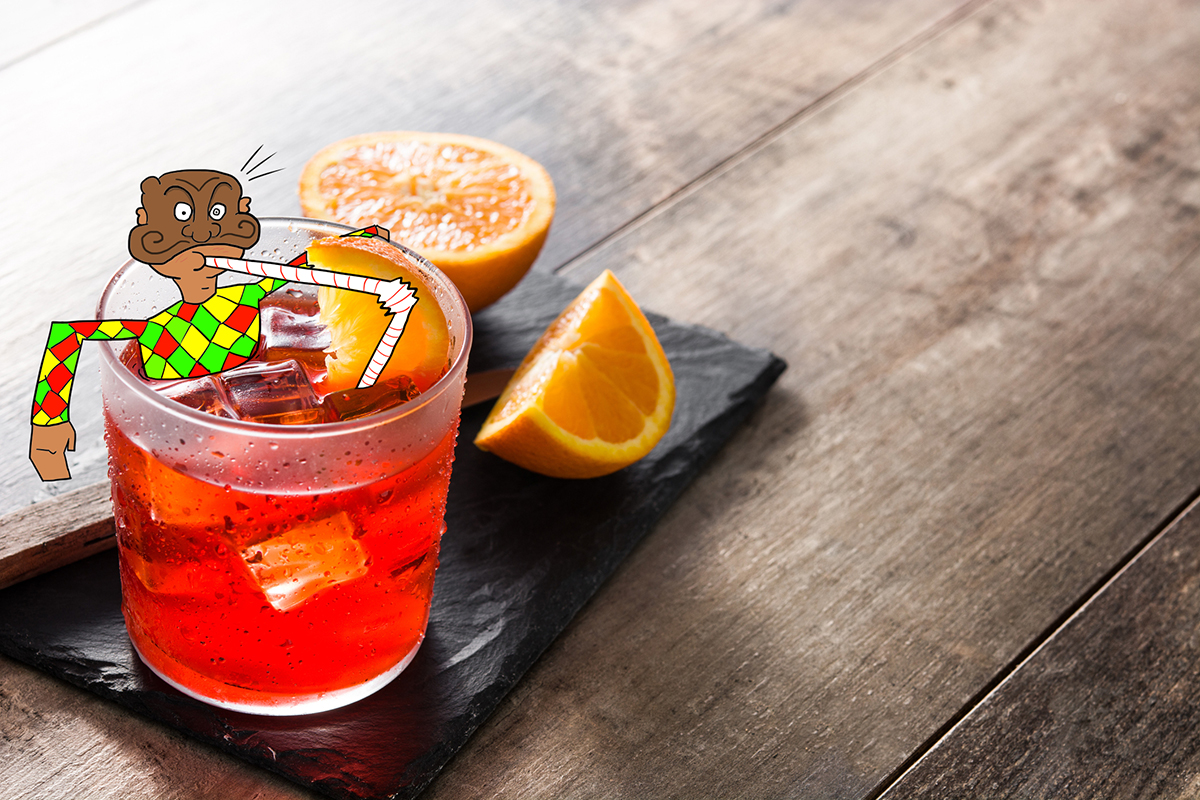 Faction of Fools, D.C.’s Helen Hayes Award-winning commedia dell’arte theater troupe, has shifted its energies during the pandemic to work on screen, developing a series of 12 short video comedies, each touted as “a little amuse-bouche of commedia dell’arte.” A three-month exercise in frivolity designed with the usual spirit of summer in mind, Foolish Fridays is lighthearted fun to help send off summer and ease into fall. The series officially launches on Friday, Aug. 7 at 7 p.m. on Facebook with the cocktail party “Toast to Foolish Fridays.” Greg Benson of the Bar None podcast will lead this toast to “sweet comedy” with a “bitter cocktail” — specifically focused on a Negroni, the classic composed of equal parts gin, vermouth, and Campari that is as quintessentially Italian as commedia dell’arte. The videos will be available on both Facebook and YouTube. Visit www.facebook.com/factionoffools.

A slew of indie-rock musicians have signed up with the nonprofit organization HeadCount to motivate their fans to update their voter registration. Confirming registration before the cutoff for fall elections is an important way to ensure one’s vote will be counted on election day, especially if there have been recent changes in local voter rolls. All those who check their status over the next week through HeadCount’s website will receive a free ticket to a special livestream of original self-recorded performances. Part of the “Live From Out There” series, the concert, set for Friday, Aug. 14, at 7 p.m., includes performances by The War on Drugs, Kyp Malone and Jaleel Bunton of TV On The Radio, Daniel Rossen and Christopher Bear of Grizzly Bear, Robin Pecknold, Waxahatchee, Kevin Morby, Tarriona Tank Ball, Hand Habits, Ciggy, Kam Franklin of The Suffers, Allison Russell and Leyla McCalla of Our Native Daughters, and The Building. Visit www.headcount.org/voteready. 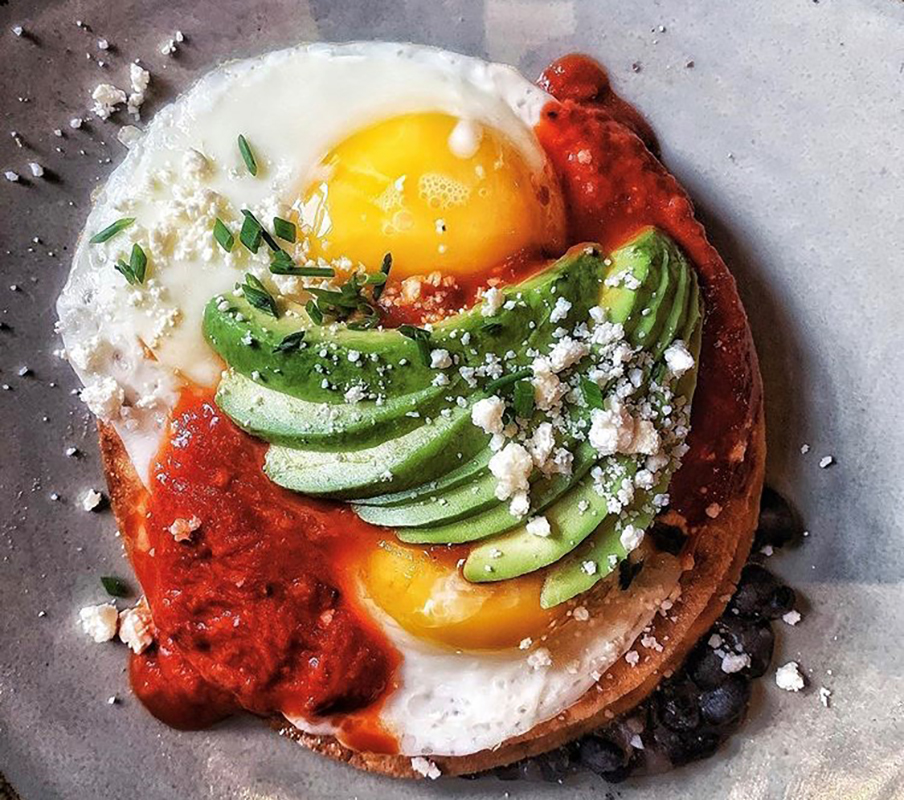 Over the years Commissary, the casual neighborhood restaurant in Logan Circle, has become known for its brunches, including those themed to coincide with special events, from the Oscars to Beyonce and Jay-Z at FedEx Field. Fortunately, you don’t have to wait for a special occasion or even the weekend anymore, as Commissary has now started offering brunch every day — and yes, you can even go bottomless with your mimosas or Bloody Mary’s if you dare. The menu ranges from Ricotta Blintzes with strawberry and fresh mint ($11), to a Southern fried chicken sandwich with a sunny side up egg ($12.50), to an Avocado Bowl with poached eggs ($11). Brunch and breakfast is available every day from 8 a.m. to 2:30 p.m. Commissary is located at 1443 P St. NW. Call 202-299-0018 or visit www.CommissaryDC.com.

To mix it up a bit, on weekends you could drop in to the original EatWellDC eatery on the block, Logan Tavern. The 17-year-old restaurant has added new items to its weekend brunch menu, including a Tomato Caprese Omelet featuring fresh mozzarella and heirloom tomatoes from EatWellDC’s farm in Maryland ($14.50) and the Brunch Platter of French toast and eggs accompanied by bacon, turkey sausage, and home fries ($16). Brunch is served Saturdays and Sundays between 10:30 a.m. and 3:15 p.m. Logan Tavern is located at 1423 P St. NW. Call 202-332-3710 or visit www.LoganTavern.com. 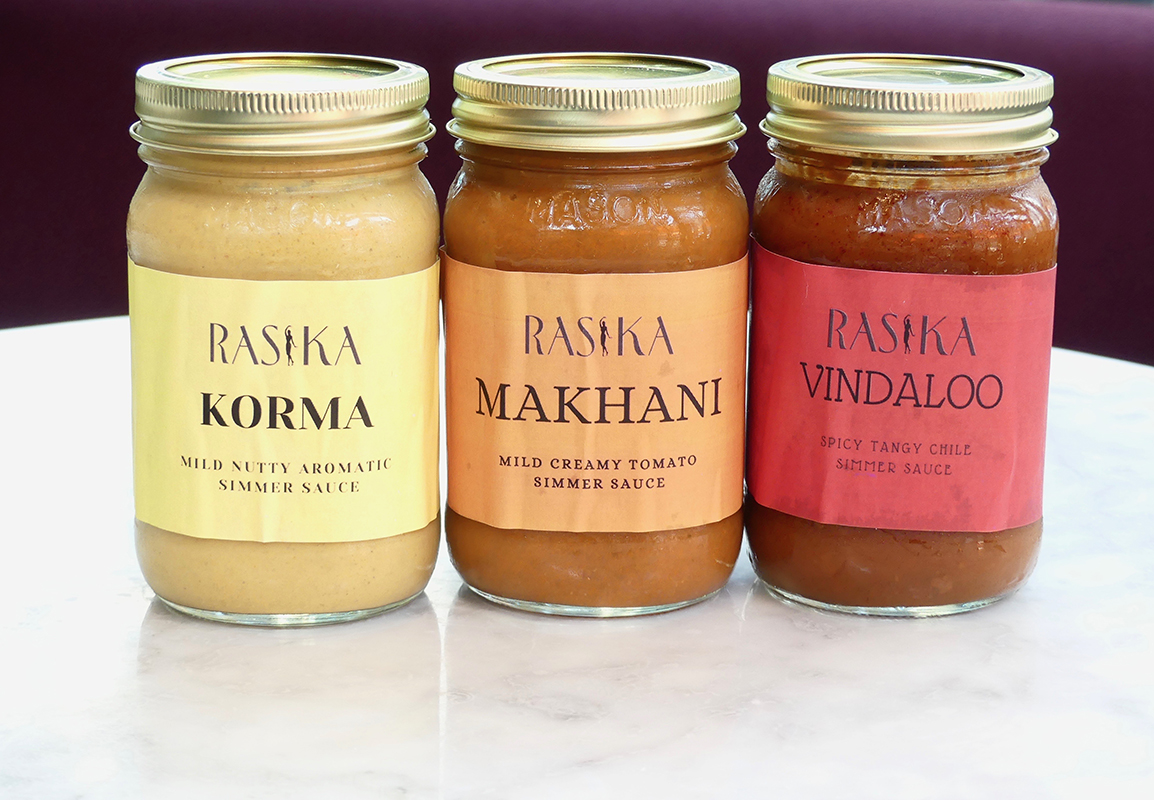 Noted local restaurateur Ashok Bajaj has bottled up three pre-made simmer sauces based on the recipes from Sunderam, the James Beard Award-winning chef. There’s Makhani, the mild, creamy tomato sauce that is ideal for chicken tikka, paneer, or Indian cheese, or over vegetables; Korma, the mild nutty aromatic sauce that pairs well with lamb and other braised meat dishes as well as paneer; and Vindaloo Curry, a spicy tangy chili sauce for chicken, lamb, pork, and shrimp. “The from-scratch sauces are labor intensive to create,” Sunderam says, “so we are making it easy for our clientele to design their own fabulous dishes in a fraction of the time by utilizing these time-tested recipes.” The sauces are available for purchase at Rasika Penn Quarter and Rasika West End as well as at their casual sister venue Bindaas Cleveland Park, plus carryout via Caviar and Doordash. Each 16-ounce container is priced at $10, or $25 for three. Call 202-466-2500 or visit www.rasikarestaurant.com.

Originally planned as a physical show to be displayed at the Middle East Institute’s art gallery in Dupont Circle, Lebanon Then and Now captures the dizzying social, political, and economic developments that have marked Lebanon over the past 15 years through the work of 17 photographers and one filmmaker. Organizers of the MEI Art Gallery, which launched last year with the aim of presenting socially engaged art from the Middle East and helping foster cross-cultural dialogue, thoroughly reimagined this temporary exhibition to become an immersive, 360-degree virtual experience. As selected by Beirut-based curator Chantale Fahmi, the featured artists in Lebanon Then and Now include, among others, Lamia Maria Abillama, Pierre Aboujaoude, Hussein Beydoun, Blanche Eid, Jana Khoury, Elias Moubarak, Badr Safadi, and Jack Seikaly. Now to Sept. 25. Visit www.mei.edu/exhibition/lebanon-then-and-now. 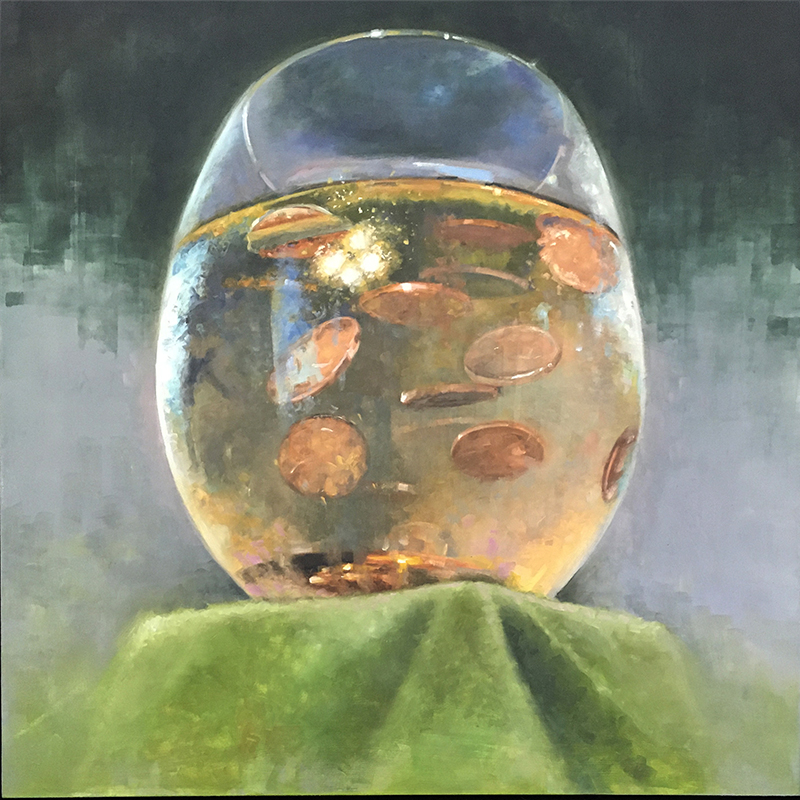 STEVEN WALKER: THIS ROUND’S ON ME

The vulnerability Steven Walker faced in dealing with depression and anxiety is reflected in the fragile glass works the artist has created in This Round’s On Me. Known for illuminating landscapes and nocturnal paintings, Walker switches things up with this personal series of still lifes. Bold brushstrokes and emotive color palettes express the artist’s deepest feelings, while objects placed within the glass evoke positive memories from his life, offering viewers a sense of hope amidst darkness, as well as the play between light and dark that Walker experiences. Presented by Georgetown’s Calloway Fine Arts, the show is intended to signal to those suffering from depression that they are not alone. On virtual display to Aug. 22, with in-person visits by appointment only. Calloway Fine Art & Consulting, 1643 Wisconsin Ave. NW. Call 202-965-4601 or visit www.callowayart.com. 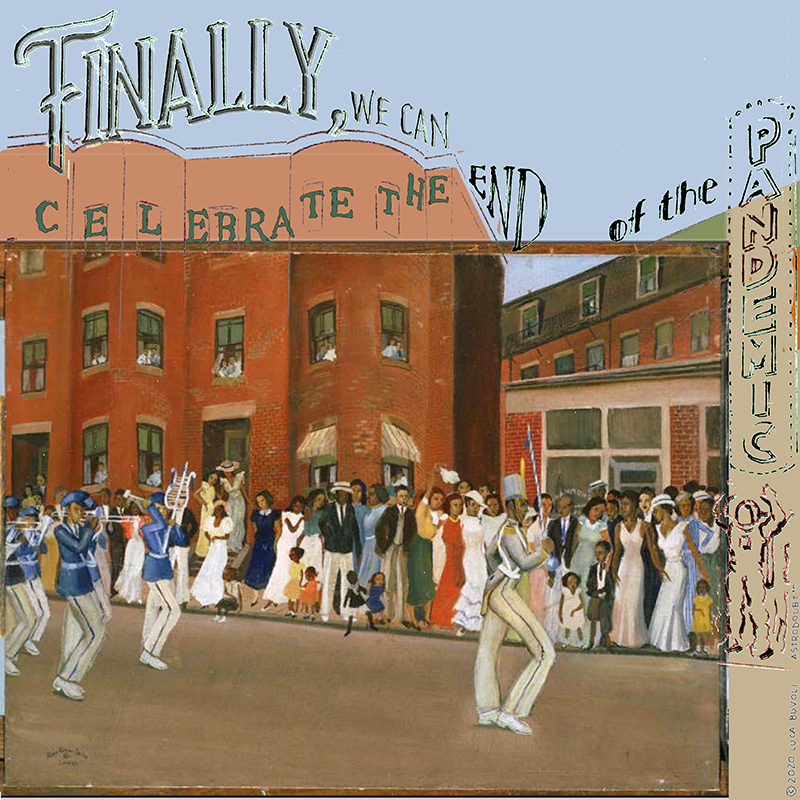 Through his ongoing Astrodoubt and The Quarantine Chronicles series, multimedia artist Luca Buvoli has been reflecting on our present-day realities through the guise of a fictitious astronaut. Named Astrodoubt, the character doesn’t let an earth-shattering deadly pandemic get in the way of his escapist fantasies about life in outer space or a post-pandemic future on this planet. Buvoli, an Italian-born, New York-based artist also on the faculty at the prestigious Maryland Institute College of Art in Baltimore, was invited by the Phillips Collection to produce new work that engages in some way with the museum’s permanent collection as part of its Intersections series — and becoming the first-ever digital Intersections edition in the process. The result is an extension of Buvoli’s Astrodoubt series — with the astronaut exploring 12 paintings from the collection, inserting text to reflect on each scene depicted from an often tragicomic perspective of COVID-19. Featured on the Phillips’ website as well as on its Instagram, Picture: Present is a 12-day exercise, with a new scene released each day through Friday, Aug. 7. A Zoom Artist Talk with Buvoli is set for Thursday, Aug. 13, at 5:30 p.m. Visit www.phillipscollection.org or www.instagram.com/phillipscollection.

Doug Rule covers the arts, theater, music, food, nightlife and culture as contributing editor for Metro Weekly. Follow him on Twitter @ruleonwriting.
← Previous Story 11 Great Things To Do in DC This Week
Next Story → 12 Great Things To Do This Week in DC (and beyond)