Appeals court: Gloucester County School Board discriminated against Gavin Grimm by barring him from boys’ restroom

On Wednesday, a federal appeals court found that a Virginia school board acted unlawfully when it passed a policy barring a transgender student from using a bathroom at his former high school that matched his gender identity.

A three-judge panel of the 4th U.S. Circuit Court of Appeals ruled 2-1 that the Gloucester County School Board violated former student Gavin Grimm’s rights, under both the Equal Protection Clause of the U.S. Constitution and Title IX of the Education Amendments Act of 1972, which was designed to prohibit sex-based discrimination.

Grimm, now a college student in California, first sued the school board after it barred him from using the boys’ restroom, in response to an anonymous complaint and outcry from members of the socially conservative rural community. Grimm had previously been allowed to use the boys’ restroom prior to the ban, and did so without incident or conflicts with other students.

Following several court rulings in his favor, Grimm’s case worked its way up to the U.S. Supreme Court and was scheduled to be heard in 2017, but that hearing was scuttled after the Trump administration rescinded guidance used by the Obama administration that had recommended schools allow transgender children to access facilities matching their gender identity, in keeping with the spirit of Title IX.

But because the 4th Circuit had previously ruled in favor of Grimm on very narrow grounds — taking its cue from the federal guidance — once the Trump administration reversed the guidance, the court had no choice to send the case back to the lower courts for a decision on whether the plain language of Title IX, which prohibits sex discrimination, applies equally to instances where transgender students are targeted or singled out for disparate treatment.

The case stalled in the federal judiciary for a few years before a federal judge in Virginia ruled in favor of Grimm in 2019, finding that transgender individuals are protected by Title IX, as well as by the U.S. Constitution.

Judge Henry Floyd, writing on behalf of the 4th Circuit, said that the school board’s actions constituted “a special kind of discrimination against a child that he will no doubt carry with him for life.”

Floyd noted in his majority opinion that the restroom policy had an adverse affect on Grimm, who avoided using the restroom at school as much as possible. This caused him to suffer from recurring urinary tract infections, requiring his mother to keep medication to treat the infections stocked at home. Grimm was hospitalized for suicidal ideation during his junior year due to feeling “unsafe, anxious, and disrespected” at school. During his senior year, due to having previously collected a number of credits for graduation, Grimm spent as little time in the high school as possible.

Related: Judge rules Gavin Grimm can sue to change the gender on his school transcript

Citing a recent Supreme Court decision finding that transgender individuals are protected from employment discrimination under federal laws prohibiting sex-based discrimination, Floyd found the Gloucester County School Board had discriminated against Grimm “on the basis of sex.”

“Although Bostock interprets Title VII of the Civil Rights Act of 1964, it guides our evaluation of claims under Title IX,” Floyd wrote. “In Bostock, the Supreme Court held that discrimination against a person for being transgender is discrimination ‘on the basis of sex.’ As the Supreme Court noted, ‘it is impossible to discriminate against a person for being homosexual or transgender without discriminating against that individual based on sex.’ That is because the discriminator is necessarily referring to the individual’s sex to determine incongruence between sex and gender, making sex a but-for cause for the discriminator’s actions.

“…[T]he Board could not exclude Grimm from the boys bathrooms without referencing his ‘biological gender’ under the policy, which it has defined as the sex marker on his birth certificate,” Floyd continued. “Even if the Board’s primary motivation in implementing or applying the policy was to exclude Grimm because he is transgender, his sex remains a but-for cause for the Board’s actions. We similarly have no difficulty holding that Grimm was harmed.

“Grimm consistently and persistently identified as male. He had been clinically diagnosed with gender dysphoria, and his treatment provider identified using the boys restrooms as part of the appropriate treatment. Rather than contend with Grimm’s serious medical need, the Board relied on its own invented classification, ‘biological gender,’ for which it turned to the sex on his birth certificate. And even when Grimm provided the school with his amended birth certificate, the Board still denied him access to the boys restrooms,” Floyd added. “For these reasons, we hold that the Board’s application of its restroom policy against Grimm violated Title IX.”

Lawyers for the Gloucester County School Board have not yet indicated whether they intend to appeal the 4th Circuit’s ruling to the U.S. Supreme Court.

The 4th Circuit’s finding on Wednesday also aligns with a similar decision reached earlier this month by the 11th U.S. Circuit Court of Appeals, which found that a Jacksonville-area school district violated a former transgender high school student’s civil rights when it barred him from using boys’ facilities.

Grimm released a statement celebrating ruling that he has been anticipating for the better part of five years.

“All transgender students should have what I was denied: the opportunity to be seen for who we are by our schools and our government,” he said. “Today’s decision is an incredible affirmation for not just me, but for trans youth around the country.”

Josh Block, a senior staff attorney with the American Civil Liberties Union’s LGBT & HIV Project, added: “Transgender students belong in our schools. The court once again ruled that school’s obligation to create an environment that is safe and welcoming for all students includes transgender students.”

Brian Bond, the executive director of the national chapter of PFLAG, also weighed in on the ruling.

“Hundreds of thousands of PFLAG families across the country celebrate Gavin Grimm’s win in court. Together with his legal team at the ACLU, he demonstrated that a transgender person is a person, that their gender is real, and that anti-trans discrimination unconstitutionally prevents a transgender student from participating fully in their education,” Bond said. “Members of PFLAG MetroDC and PFLAG chapters throughout Virginia have testified, rallied, and met with school leaders in support of transgender students like Gavin. In Virginia and across the country, PFLAGers celebrate this legal win for transgender students and their families.”

Trump’s global campaign to decriminalize homosexuality is a “sham”

The Texas Supreme Court has issued a mixed ruling regarding state investigations into parents who allow their transgender children to access gender-affirming care.

The high court stopped an investigation into the family of a particular transgender minor, whose mother, Jane Doe, works for the Texas Department of Family and Protective Services and questioned how the department would enforce a directive from Gov. Greg Abbott. That directive ordered state agencies to investigate parents who allow transgender children to access puberty blockers, hormones, or surgery (which is rarely performed on minors) for "child abuse."

On Thursday, a group of Florida school-age students, parents of LGBTQ youth, and a teacher filed suit against a recent bill signed into law by Gov. Ron DeSantis that prohibits LGBTQ-related content or lessons in primary grade classrooms.

The lawsuit, filed in U.S. District Court for the Northern District of Florida on behalf of the pro-LGBTQ organizations Equality Florida and Family Equality and the other plaintiffs, argues that they face, and have already begun to suffer concrete harms due to the "Parental Rights in Education" law, which has dubbed by critics as the "Don't Say Gay" law.

Jesse Vroegh was denied insurance coverage for medically necessary care and barred from the men's restrooms and locker room at work. 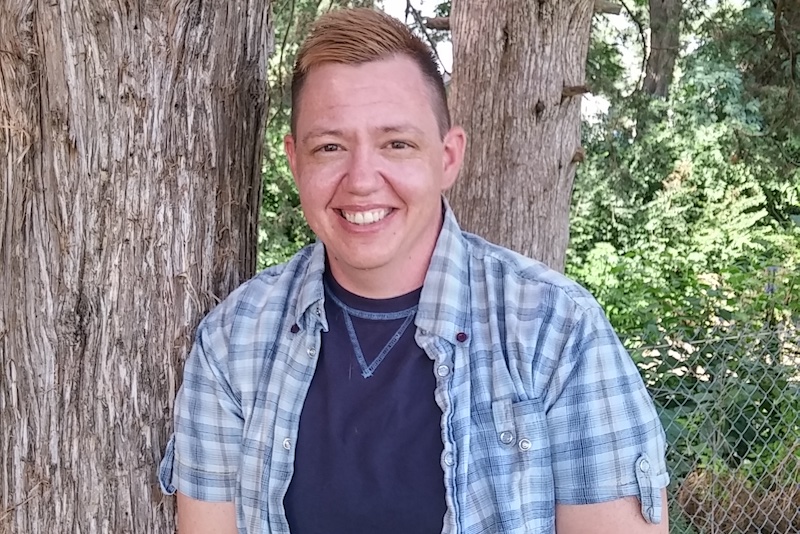 The Iowa Supreme Court has ruled that the state's Department of Corrections discriminated against Jesse Vroegh, a former DOC nurse, when it denied him insurance coverage for gender-affirming surgery and barred him from using the men's restrooms and locker room at work.

Vroegh, a nurse at the Iowa Correctional Institute for Women, in Mitchellville, Iowa, sued the Department of Corrections for discrimination after his supervisors denied him access to men's facilities after he transitioned in 2016, claiming that allowing him into male-only spaces would be "too controversial."

Vroegh was forced to use a unisex private restroom to dress and store his belongings, and, because it lacked a shower, was barred from using shower facilities before or after his shift.