Home / News + Politics / Nation / Two men arrested, one still at large, in attack on Eden the Doll and two other trans influencers 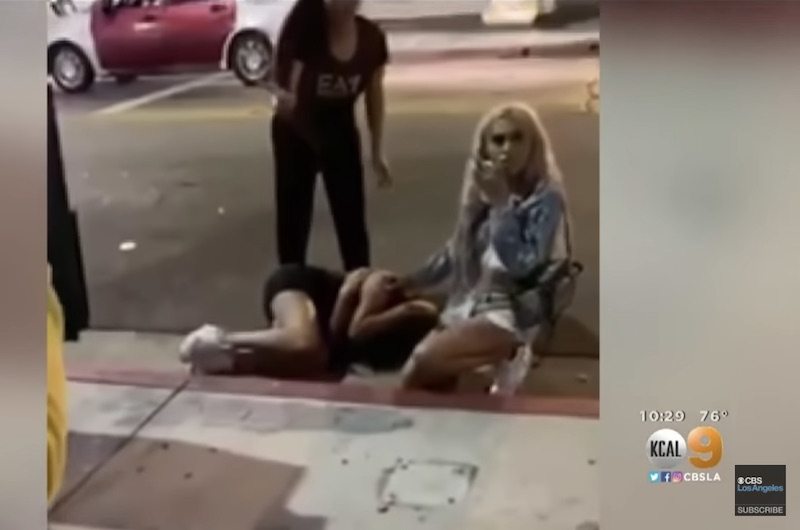 Los Angeles police have arrested two men, and are searching for a third who was allegedly involved in the robbery and assault of trans YouTube personality Eden the Doll and two other transgender influencers, who were attacked in Hollywood last week in a suspected hate crime.

Police have announced the arrest of 29-year-old Carlton Callway in relation to the robbery and the hate crime, and of Willie Walker, a homeless man, on extortion charges. But the LAPD is continuing to search for a third suspect, Davion Williams, who is wanted for assault. Video of the assault, which was posted on Instagram and other social media channels, was used to identify the suspects.

According to police, Eden the Doll, also known as Eden Estrada, Jaslene Whiterose, and Joslyn Flawless were viciously attacked on Hollywood Boulevard around 2:15 a.m. last Monday while they were waiting for an Uber.

They say a man approached the three women with a metal bar and demanded one of the women’s shoes and bracelet. During the attack, he hurled several anti-transgender slurs at the women, and eventually absconded with the women’s cell phones, wallets, and purses.

The suspect grabbed one of the women and forced her to walk a short distance with him before she could escape. During the robbery, Estrada said the man hit Whiterose over the head, knocking her unconscious, according to CBS Los Angeles.

“My friend completely collapsed,” Estrada said in a video she posted after the attack. “I’m not a doctor. I don’t know if she’s breathing. I’m trying my hardest to help her. I’m begging for help. I’m screaming for help.”

During and following the robbery, people across the street were filming the attack and yelling out derogatory terms for transgender people, laughing at the women.

Joslyn Flawless posted a video to her Instagram account recounting the experience, writing: “Scariest moment of my life. This is where i was while @edenthedoll and @jaslenewhiterose were crying for help. He held a crow bar to my face and threatened to kill me unless I stripped my shoes off and gave him my jewelry and all my processions.

“He said if i was trans he would kill me. He then forced me to hold his hand while he looks for my friends to kill them for being trans. Meanwhile men and WOMEN screaming that I’m a man and telling him to beat me.”

Estrada, who has almost half a million followers on social media, later said she was able to get a copy of the video and give it to police after witnesses uploaded it to social media and tagged her.

“I know that I’m so privileged, because I am a YouTuber and because people know who I am, but this happens all the time to women like me who aren’t on social media,” Estrada said. “We need this to stop.”

On Thursday, dozens of demonstrators marched down Hollywood Boulevard in support of the women. Tens of thousands of people also signed onto a Change.org petition to call for an end to violence against transgender women.

“In a very divisive world, especially in today’s social climate, let us not forget about the trans community, for they have the dimmest voices as they are not amplified enough and are often excluded,” the petition reads.

“On behalf of all of the loved ones of Joslyn, Jaslene, and Eden, we demand this justice. All of the men involved and responsible for these inhumane acts of violence must be arrested, interrogated, and charged for assault, robbery, and attempted murder. Violence against all women should not be tolerated.”