By John Riley on December 11, 2020 @JohnAndresRiley 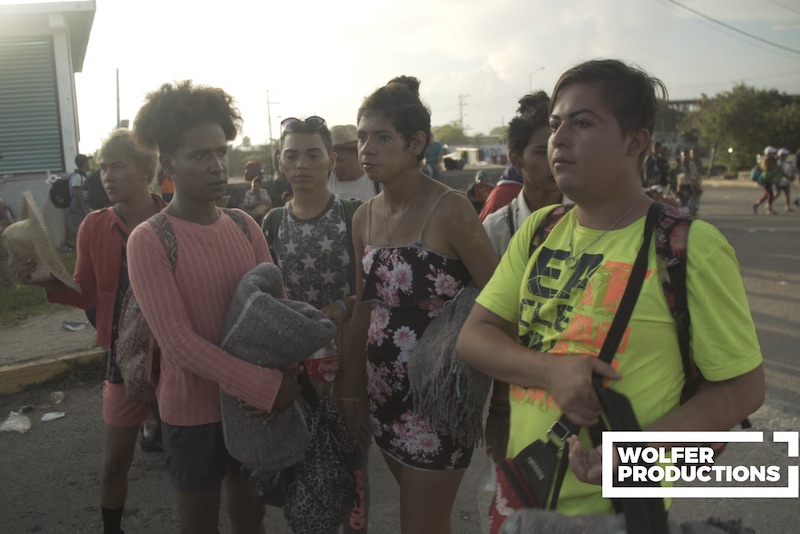 A screenshot of LGBTQ asylum seekers in the film “The Right Girls” – Photo: Wolfer Productions

The U.S. Department of Homeland Security and Department of Justice announced plans to publish a new rule that would effectively make it impossible for most LGBTQ and HIV-positive refugees to seek asylum.

The proposed rule would rewrite asylum law without authorization from Congress and reinterprets who qualifies as a “refugee” in a limited way so that most LGBTQ or HIV-positive refugees would no longer qualify. Critics say it would result in asylum seekers being put at risk when they are returned to countries where they are targeted for their sexual orientation or gender identity.

The rule raises the standards for “credible and reasonable fear” interviews, which are used to determine the level of threat that an individual faces in their country of origin, meaning immigration judges will be empowered to categorically dismiss certain claims without granting hearings or taking into account the individual circumstances of each asylum seeker’s case.

For example, a person who is threatened with death or bodily harm in their home country because of their sexual orientation or gender identity would not necessarily be allowed to cite that as a reason for seeking asylum, because threats — even promising loss of life — do not meet a newer, more rigid definition of what constitutes “persecution.”

Critics have also complained that the way in which the rule is constructed allows applicants for asylum to disclose their LGBTQ or HIV status only once — without taking into account cultural considerations that may initially inhibit people living with HIV or those who identify as LGBTQ from disclosing their status.

To qualify for asylum, refugees must demonstrate they belong to one of five protected classes of people who cannot return to their country of origin because of the threat posed to them because of their race, religion, nationality, political opinion, or membership in a “particular social group” (PSG), which may include sexual orientation, gender identity, or serostatus.

The proposed rule also seeks to codify nine exceptions to determining whether a person belongs to a “particular social group,” further restricting the ability of some LGBTQ and HIV-positive applicants to claim asylum.

Lambda Legal and Immigration Equality, two LGBTQ groups who have previously clashed with the Trump administration over its LGBTQ record and its treatment of refugees, have threatened to sue over the new law if it is implemented and enforced by the government.

“The depth of the Trump administration’s cruelty toward some of the most vulnerable people in the world truly knows no bounds,” Kevin Jennings, the CEO of Lambda Legal, and Aaron Morris, the executive director of Immigration Equality, said in a joint statement.

“In many countries LGBTQ people and those living with HIV face unimaginable abuse and violence at every turn. The United States has long held itself out as a beacon of hope for these individuals, many of whom risk their lives to seek asylum here,” the statement reads. “While the Trump administration’s days are waning, it is critical to stop this rule in its tracks. Unless we stop it, the asylum ban would inflict irreversible damage on LGBTQ and HIV-positive asylum seekers desperate for a chance at safe haven in the U.S.”

French politician comes out as gay, promises to visit “LGBT-free” zones in Poland

John Riley is the local news reporter for Metro Weekly. He can be reached at jriley@metroweekly.com
← Previous Story The Neighborhood’s “Sweater Weather” becomes bisexual anthem on TikTok
Next Story → Lesbian couple settles lawsuit with senior living community that rejected them