The U.S. Department of State has commemorated the first ever flying of the LGBTQ Pride flag at the department’s headquarters.

While U.S. embassies have flown the Pride flag for years — except for when the Trump administration banned them — this marks the first time that State Department headquarters has flown the flag.

“I was honored to speak today as the progress flag was raised over @StateDept headquarters for the first time, showing the flag, “demonstrating to people everywhere that the United States is committed to fighting for LGBTQI+ rights at home and abroad,” Deputy Secretary of State Wendy R. Sherman said in a tweet.

I was honored to speak today as the progress flag was raised over @StateDept headquarters for the first time—demonstrating to people everywhere that the United States is committed to fighting for LGBTQI+ rights at home and abroad. #PrideMonth2021 pic.twitter.com/JnMkatH0Iq

In her remarks, Sherman noted that the Supreme Court legalized same-sex marriage six years ago this month.

“It was a beautiful summer day much like this one. The District of Columbia and communities across the country all but exploded with joy and love,” Sherman said. “By nightfall, the White House was bathed in rainbow lights — the colors of Pride. But there was sadness too underneath the excitement that it took so long, that activists had to fight so very hard, that so many people didn’t live to see their relationships validated by the highest court in the land.

“Today’s ceremony is another joyful celebration, but it also gives us opportunity to reflect on the past and to recommit ourselves to supporting diversity, inclusion, and the rights of all people everywhere in the world.”

Sherman acknowledged the State Department’s own anti-LGBTQ history, including the “lavender scare” of the 1950s, in which Sen. Joseph McCarthy and other government leaders “claimed that gay and lesbian workers couldn’t be trusted to serve the United States and that they were of ‘dubious moral character.'”

“Across the federal government, countless public servants were investigated, punished, and oftentimes fired because of who they were and who they loved. And sadly, the State Department was especially aggressive in persecuting our own,” Sherman said.

“Our mission is to serve the interests of the United States and to promote American values around the world. Our ability to stand up for human rights, for democracy, and for justice overseas is utterly dependent on the actions we take here at home,” she continued. “As much progress as we have made as we are celebrating today, we still have work to do to guarantee equality for LGBTQI+ people in our workplaces, in our schools, at the Department of State, in our government, and in our society.”

Sherman said the State Department raised the Progress Pride flag to “signal to people everywhere that the United States is firmly committed to doing that work and to fighting for LGBTQI+ people at home and everywhere.”

“And we raise this flag in recognition as well of the countless Civil Service and Foreign Service officers, locally employed staff, contractors, even us appointees — past and present — who have worked to change the State Department, the country, and the world for the better.”

U.S. Secretary of State Antony Blinken, who is currently overseas, acknowledged the “historic moment” in a tweet.

“For the first time, [the State Department] and [LGBT+ Pride In Foreign Affairs Agencies] raise the progress flag, a symbol of the diversity and intersectionality of LGBTQI+ persons and communities around the world, at our headquarters in DC for #PrideMonth,” he wrote. “I’m truly honored to serve as Secretary during this historic moment.”

For the first time, @StateDept and @glifaa raise the progress flag, a symbol of the diversity and intersectionality of LGBTQI+ persons and communities around the world, at our headquarters in DC for #PrideMonth. I'm truly honored to serve as Secretary during this historic moment. https://t.co/3yJivnbJXS 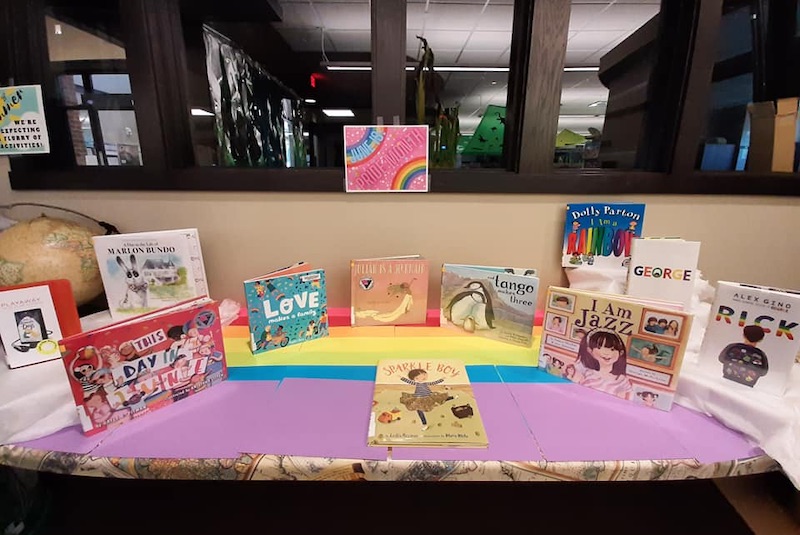