Stewart is as good as advertised in Spencer, a well-produced wallow in the angst and sadness of Princess Diana

Spencer might be just as fascinating a character study even if the troubled woman at its center were a randomly chosen wife and mother, dreadfully unhappy in her marriage, struggling with an eating disorder, and painfully distraught at spending another holiday weekend locked in the icy glares of her cheating husband’s family. But director Pablo Larraín (Jackie) has trained his focus on Diana, Princess of Wales, one of the most famous women who ever lived, and we know how, when, and in what ghastly manner her fairytale came to an end.

So, every tearful moment that Diana, portrayed with winsome melancholy by Kristen Stewart, spends in Spencer (★★★★☆) sulking around the rolling grounds of Sandringham House bears the weight of our common knowledge. As bad as this Christmas weekend with Charles and the other royals might feel to her, we feel for her knowing that something worse lies ahead. The signs are there from the beginning, as the procession of military vehicles that precedes the royal family to the estate rolls over a dead pheasant lying in the road. Diana, in Chanel, and driving herself in a Porsche convertible, gets lost on the way, finally arriving late and alone, much to the family’s dismay.

The film, which shot some exteriors at Sandringham, doesn’t stint on the luxurious trappings of the royal retreat, or its regal occupants. The Queen (Stella Gonet), Philip (Richard Sammel), Charles (Jack Farthing), and company roll in caravans of Rolls Royces and Range Rovers, dining on pheasant and lobster while decked in jewels. Diana, dressed and attended to by a retinue of maids and servants, stalks the well-lit galleries in fabulous gowns, underscored by composer Jonny Greenwood’s doleful strings and piano sonatas. Presenting their muse in warm, flattering tones, Larraín and cinematographer Claire Mathon, who also shot the sublimely beautiful A Portrait of a Lady on Fire, emphasize Diana’s flickering light and movement. Even when posed among them, she stands out from the dull, tweedy Windsors.

The smart script by Steven Knight provides her the sardonic wit to speak out against their staid rituals and traditions. Although, true to reports of how Diana spent country weekends with the family, she spends more time chatting up the servants than in the company of the Queen. On several occasions, she butts heads with Major Gregory (Timothy Spall), the Queen’s eyes and ears on all that transpires under her roof. Spall coats the character in steel — the Major will not bend to Diana’s charms, nor her insistence on flouting traditions. She sees him as the warden in this weekend prison, and he lives up to the role.

While inviting the audience to scoff at Diana’s sense of confinement within so much wealth and privilege — after all, she knew what the game was — the movie very clearly falls on the side of supporting her yearning to break free. At one point, Diana literally has to get wire-cutters to open her bedroom drapes, which were sewn shut for her “privacy.” Every waking moment, someone is telling her what she should be doing, wearing, saying, sometimes even feeling.

Most poignantly, she’s watched and waited on by people she can’t really talk to, nor expect to speak to her with openness and candor. She does confide in her regular dresser Maggie, played with layers of care and sensitivity by Sally Hawkins, and, alone with her boys Will (Jack Nielen) and Harry (Freddie Spry), she can at least let her guard down and be herself. Stewart’s revelatory performance finds that spark of joy that Diana only sees in her sons, as well as the sting of betrayal she feels at the brief sight of Camilla Parker Bowles outside the chapel on Christmas Day.

What starts out seeming like an impression of this famous figure, of her shy posture and darting glances, gels into a robust portrayal of a bright but tremendously sad wife and mother contemplating the end of her marriage, maybe even her life. Larraín’s film, billed as “a fable from a true tragedy,” doesn’t fascinate just because we knew Diana, but because we might know many like her, who feel trapped in the life that everyone thinks they wanted.

BenDeLaCreme & Jinkx Monsoon are mad for the holidays

The pair celebrate the season with audiences in The Return of the Jinkx and DeLa Holiday Show, LIVE! 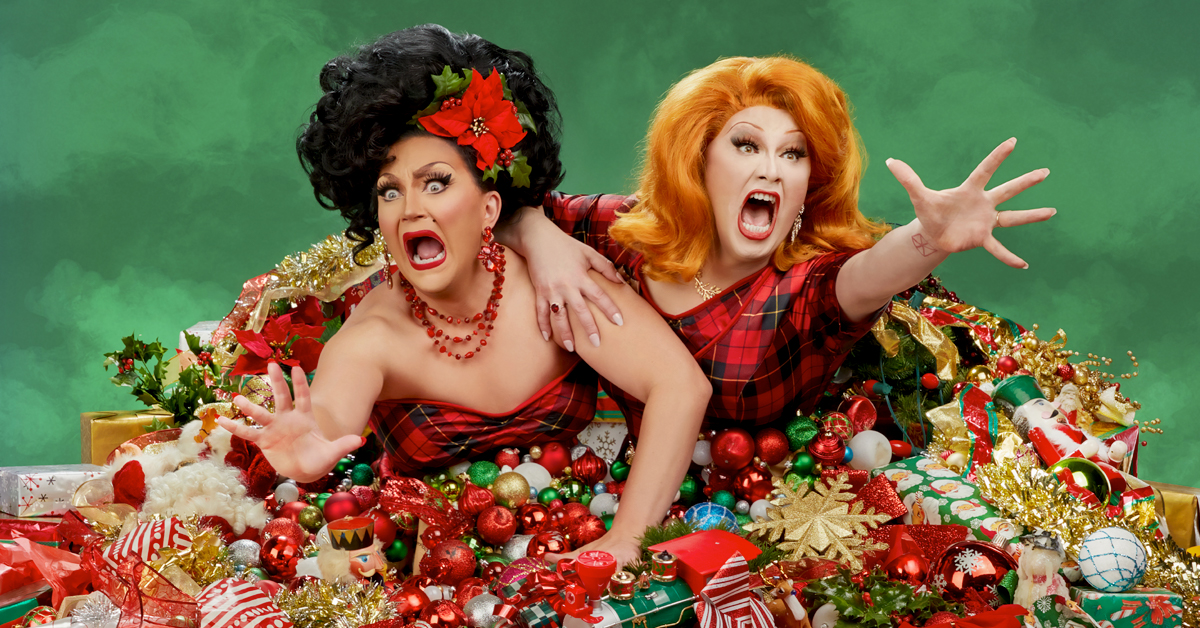 Decked out in festive gay apparel, drag superstars BenDeLaCreme and Jinkx Monsoon drop into our Zoom chat looking primed and ready to spread holiday cheer with their latest extravaganza, The Return of the Jinkx and DeLa Holiday Show, LIVE!.

Since 2018, the delightful duo’s holiday musical-comedy spectaculars have become a perennial treat -- although last year, the performers were forced by COVID lockdowns to pivot to a filmed version. The resulting 60-minute The Jinkx & DeLa Holiday Special was a hit with critics and audiences alike, joining the ranks of holiday favorites that fans can return to year after year.