The Chicago Department of Public Health has urged people to take proper precautions when in spaces or situations where the virus could be spread through close or intimate contact.

It has also sent communication to public health departments around the country requesting notification of any infected individuals who visited Chicago over the Memorial Day Weekend, in order to help with contact tracing.

According to the CDC, there have been more than 1,600 confirmed cases across the world, mostly in Europe, with 64 confirmed cases in 21 U.S. states as of June 16. Seventeen states and the District of Columbia have case counts in the single digits, with 13 confirmed cases in Illinois, 17 in New York, and 21 in California.

Many, though not all, of the reported monkeypox cases have occurred among men who have sex with men. However, monkeypox is not considered a sexually transmitted disease and nor is it endemic to the LGBTQ community.

Most of those infected have reported only mild symptoms, and more severe cases can be treated with antiviral medication. No deaths have been linked to the virus.

The virus that causes monkeypox is spread by skin-to-skin contact with someone with monkeypox sores, as well as direct contact with materials that have touched body fluids or sores, like clothing or bedsheets.

It can also potentially spread through respiratory secretions when people have close, face-to-face contact with an infected person, according to the Centers for Disease Control and Prevention.

The CDC has said it is unclear whether monkeypox can spread by means of semen or vaginal fluids.

According to Newsweek, researchers at the Spallanzani Institute, an infectious disease research facility in Rome, have detected fragments of monkeypox genetic material in the semen of six out of seven patients it has been treating, with one patient’s sample suggesting that the virus found in his segment had the potential to infect another person. However, this data has not been peer-reviewed or published yet.

Francesco Vaia, the Institute’s general director, told Reuters that there is not enough evidence to prove that the virus’s biological traits have changed to become sexually transmitted.

The Chicago Department of Public Health has warned individuals attending festivals or other summer events — of which there are many planned in the city — to consider how much close, personal skin-to-skin contact may occur at various events. Individuals who are sick or have rashes or sores are advised to self-isolate and visit a health care provider as soon as possible.

“While the risk in Chicago remains low, CDPH wants the public to be able to make informed choices about gathering in spaces or participating in events where monkeypox could be spread through close or intimate contact,” Dr. Allison Arwady, the department’s commissioner, said in a statement.

A representative from International Mr. Leather was not immediately available for comment.

Health authorities are warning men who have sex with men to be aware of unusual rashes or lesions, and seek treatment promptly. 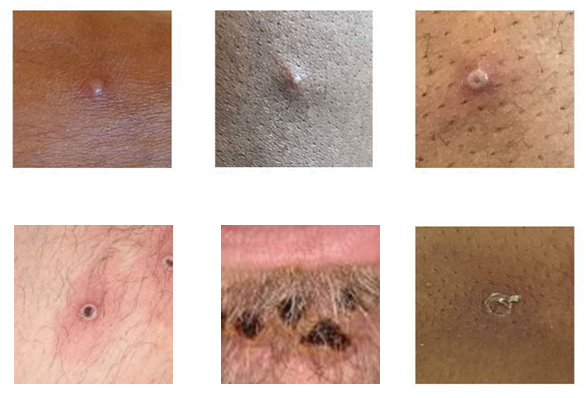 Health authorities in Europe, the United States, and Australia are investigating a recent outbreak of monkeypox, a rare viral disease typically found in Africa.

Germany reported its first case of the virus on Friday, becoming the 11th country to confirm a case of infection. Other countries with confirmed cases are Australia, Belgium, Canada, France, Italy, Portugal, Spain, Sweden, the United Kingdom, and the United States -- with more than 100 confirmed or suspected cases in total.

The breadth of the infections, and their seemingly rapid spread, have health experts looking into their root cause.