The rally in Prague’s Wenceslas Square was held on the same day as the funerals of victims Matúš Horváth, 23, and Juraj Vankulič, 26, who were slain outside the Teplaren bar in Bratislava on Oct. 12 by a 19-year-old gunman who had allegedly been “radicalized” by right-wing, anti-Semitic, anti-Islamic, and anti-immigrant propaganda. A third victim, identified as Radoslava T., 28, was wounded in her leg.

Attendees held banners reading, “We want to live without fear,” expressing solidarity with the victims of the shooting, and demanding better protection of LGBTQ people and their families.

“A terrorist intentionally killed LGBTQ people,” Czeslaw Walek, one of the organizers, said in a statement. “Only by accident did he not kill more.”

The suspected killer, identified by Homeland Security Today as 19-year-old Juraj Krajcik, the son of a former parliamentary candidate for the far-right nationalist party Vlast, reportedly tweeted the hashtags “#bratislava #hatecrime #gaybar,” and tweeted with the hashtag “#bratislava”: “feeling no regrets, isn’t that funny?”

Police say they found Krajcik’s body on Thursday morning around 8 a.m. He reportedly died of a self-inflicted gunshot.

According to The Associated Press, Krajcik tweeted a picture of himself standing across the street from Teplaren bar in August, and made postings in subsequent months that appeared to allude to plans to carry out violence at the bar. He also allegedly posted a racist manifesto attacking the LGBTQ and Jewish communities prior to the killings.

In that 65-page manifesto, the author — who claimed to be of Slovak origin and signed the manifesto as “JK” — blamed Jewish people “for the unchecked rise in non-White immigration to Europe and the US,” as well as COVID-19 vaccinations, which he called “a form of complete social control,” Homeland Security Today reported. Krajcik called for anti-Jewish violence and the “total eradication of all Jews, to the last man, woman, and child.”

The manifesto’s author also claimed to have drawn inspiration from Brenton Tarrant, the shooter in attacks on two mosques in Christchurch, New Zealand; John Earnest, who attacked a synagogue in Poway, California; several other mass shooters; and Payton Gendron, the suspect in a mass shooting at a Buffalo supermarket earlier this year, whom he said gave him “new inspiration.”

Prosecutor Daniel Lipšic said police believe Krajcik returned home after the shooting, and are investigating the shooter’s parents for not alerting the police. The weapon used in the attack was reportedly recovered from Krajcik’s home.

“It is questionable what information the parents had, it is extremely serious that they did not report the matter,” Lipšic said, according to Reuters.

Police said they were initially investigating the shooting as a hate crime, but later classified it as an act of terrorism motivated by hatred of the LGBTQ community. They also said the suspect was likely planning to target other people, including Slovak Prime Minister Eduard Heger.

Heger condemned the attack afterwards, as well as the ideologies that allegedly led the shooter to carry out the attack.

“I strongly condemn a murder of two young people shot dead in Bratislava last night by a radicalized teenager,” Heger tweeted. “No form of white supremacy, racism and #extremism against communities, incl. #LGBTI, can be tolerated. We will fight disinfo channels spreading hate & protect minorities.” 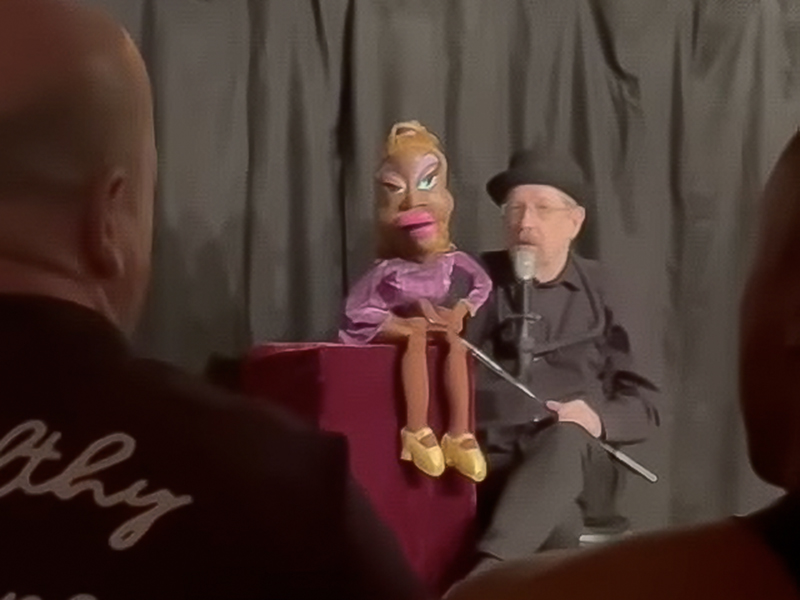 A Chicago gay bar is being taken to task for hosting a puppeteer who put on a show trafficking in racist stereotypes about Black people that angered both those in attendance and -- once video of the performance was circulated online -- many in the LGBTQ community generally.

The performance took place during the 45th anniversary celebration for Touché, an LGBTQ leather bar located in the city's Rogers Park neighborhood. The owners of the bar had hired comedian Jerry Halliday -- who had performed at the bar in the past -- for the event, but reportedly did not preview his performance to check if it was appropriate, according to the nonprofit news outlet Block Club Chicago.