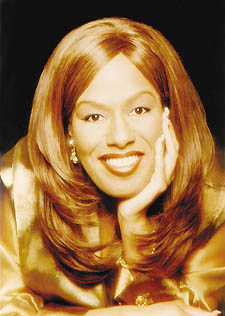 “I no longer live in sorrow,” proudly proclaims Jennifer Holliday. “I no longer have a lot of misery. But I definitely know how to sing a love song.”

This woman with a voice so rich, so resonant, so sweet, so thunderous that it could topple Rome and probably sink the rest of Italy as well, took Broadway by storm in 1981 with her defining portrayal of Effie White in Michael Bennett’s Dreamgirls. After leaving Dreamgirls, Holliday had a modest success as a recording artist — and found a performing haven in the gay nightclub circuit — but it wasn’t until a few years ago, with a recurring guest stint on Ally McBeal that Holliday reentered the public eye in a big way. “Seventeen million viewers, every week,” she says, “and most of them had never even heard of Dreamgirls.“

And this once famously overweight, now fabulously svelte woman with that amazing voice will be on the Main Stage of the Capital Pride Festival this Sunday, June 8, to topple the capital and sing, among other things, her signature hit from Dreamgirls, “And I’m Telling You I’m Not Going.”

Prepare to be blown away.

METRO WEEKLY: You’re scheduled to appear at this Sunday’s Capital Pride Festival. Can you talk a little bit about what the gay audience has meant to you over the course of your career?

JENNIFER HOLLIDAY: Well, first of all, I would say that if it were not for the gay and lesbian community, I would really not have half the career I’ve had. Throughout the lows in my career, this community remained loyal, remained faithful, didn’t care whether I had a hit record or not. This community supported me, this community fed me and paid my mortgage by letting me sing in the clubs at three, four o’ clock in the morning, by just letting me support myself and not become a humiliating story on E! [Laughs.]

I guess you could call it a love affair between myself and this community. And because of their undying love, it carried me over until the rest of the world caught up.

MW: What do you think makes gays so loyal to artists?

HOLLIDAY: That I don’t know. I’m not a psychologist and I don’t really ask a lot of questions. But the only thing that I did notice — the one time that I was hurt by the gay and lesbian community — was when I first lost weight years ago and suffered a lot of rejection from them. I got a lot of ugly mail. Not nasty, but in the sense that they felt that I had abandoned them. And my reply back was, “Look, I am not about to be big and fat again just so you can feel better about yourselves.”

MW: Do you remember the first time you had a notion of what gay was?

HOLLIDAY: Yes, I do, because I’d come from Texas — went straight from the church to the theater [in New York City]. My first show, before Dreamgirls, was called Your Arms Are too Short to Box with God. And during that time, it was the first time that I had ever seen two men kissing. And I was really shocked because I had never envisioned, in my mind, what that would look like. Everybody in New York back then was free, everybody was doing things, and I just figured you either know, you don’t know, or you go along with the program.

MW: What gifts do you feel you bring to the world?

HOLLIDAY: I think that my music is pretty much the only gift that I have. I’m not a wealthy person, so it’s not like I can go around and be some kind of great philanthropist. And so my music is my gift, and I try to be true and honest with that — the emotion is real, the love is real, and it’s very passionate. And then in my life I try to also be a giving friend and a giving person in my community and do as much as I can wherever I can.

MW: You have gay friends.

MW: How would you respond to somebody who called one of your gay friends a faggot and started spewing hatred?

HOLLIDAY: I don’t know. I can’t imagine that happening. I’ve never seen that. But I’ve also never seen anybody come up to a black friend of mine, either, and call them names. Unfortunately, I have been with some Jewish friends and heard some terrible things said about them. I was completely shocked — I had no idea that there was so much hatred against Jews, not only in the world but also in America.

MW: Final question: What defines a diva these days?

HOLLIDAY: A diva these days has changed since the days that we were really divas. I mean, now people who really can only sing two notes are divas. [Laughs.] All because they can demand a big salary and a big entourage. So diva to me is associated with the word demand. Back in the day, we worked for Divadom or Divaship, whatever you want to call it. Now it’s not something that’s earned, it’s something that everyone gives a title to. If you can generate some sales, you’re a diva. And it doesn’t matter if you can really sing or not.

Jennifer Holliday will perform at the Capital Pride Festival Mainstage this Sunday, June 8. Visit www.capitalpride.org. Ms. Holliday will also perform at The Edge on Friday, June 6, at the weekly party Bounce, at 1:30 a.m. See The Edge Friday night listing in Nightlife for more details. Visit www.edgewet.com.

Randy Shulman is Metro Weekly's Publisher and Editor-in-Chief. He can be reached at rshulman@metroweekly.com.
← Previous Story Faces of Pride
Next Story → Weatherproof Pride