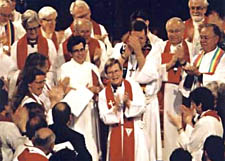 THE CULTURE WARS are all around us — and their fiercest warriors take the unlikeliest forms. Anita Hill is a plain, unassuming Minneapolis woman. But her ascension in the Lutheran Church as an openly lesbian pastor ignited a firestorm of controversy in the summer of 2001.

THIS Obedience follows Anita’s journey as she clashes with the church over its tortured ruling that gays and lesbians be allowed to serve so long as they avoid homosexual sex. Anita refuses to abide by a ruling that ignores her committed relationship with her longtime partner.

Following her ordination at a ceremony that attracted church leaders from as far away as Europe and was covered by CNN and the Washington Post, the national Lutheran Church censures her congregation for “ecclesiastical disobedience.”

It’s a courageous documentary that takes on the strange and sticky links between gays and religion. But Jamie A. Lee and Dawn Mikkelson’s film is wholly unapologetic as it seeks to expose the sheer hypocrisy of church members who espouse Christian rhetoric while excluding gays and lesbians.

As in any war, heroes abound. A group committed to ending the “spiritual violence” against gays and lesbians holds silent vigil outside the national meeting of the Lutheran Church. Agitators within the conference lobby fellow congregants to support an end to the ban on gay and lesbian pastors in committed relationships. In the end, justice moves slowly. The church-wide assembly agrees only to “study” the matter and report back to the congregation in 2005. The hopes of Anita and her companions are dashed.

Ultimately, it’s Anita’s faith — enduring and resolute — that sustains her. Of course, that’s the real joy of this powerful documentary. Sure, this is a story about religion, sexuality and politics. But more that that, it’s a story about belief, the very force that compels so many of us to get out of bed every day and continue marching even when we’re exhausted, even when others beat us down.