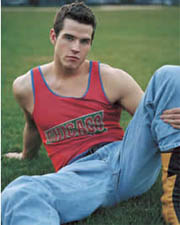 FABULOUSNESS MAKES me tired. So goes The Look, a full-frontal peek at the high-wattage world of fashion. It’s not as vapid as its characters, but it’s halfway there.

Everyone’s in — where else? — New York City for a big, fierce, fabulous modeling competition. There’s plenty of attitude and bitchiness, narcissism and backstabbing. You find yourself glad you’re not there.

The standard-issue plot is not helped by a script full of snarky one-liners that fall impossibly flat (and, even worse, that were clearly intended to prop up otherwise throwaway scenes). What does help it out are a few peripheral characters: Alec, a straight male bimbo who has “never left Staten Island.” His hair-obsessed auto mechanic persona is wonderfully hateful.

But Jesse mostly just stands around making eyes at Tommy. The same eyes. Every time. And while Tommy is charming, his bumbling, just-recently-out schtick is overplayed to absurdity. Hedda Lettuce could have been funny if given an actual role that went beyond sound-bytes.

In all of this ickiness, however, some character development must have taken place somewhere, because when the contestants line up for the judges at the end, you actually find yourself caring who wins. And the outcome isn’t even the predictable schlock you’d expect from a movie like this. Who knew? For this reason, it averts a zero rating. Still, for nine bucks, not worth the, uhÂ…look.