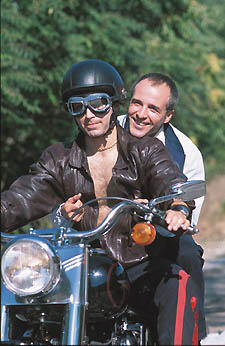 THIS EXTREMELY well-made Spanish film could just have easily been called: Sexy, Bulgarian Rent Boys and the Rich, Effeminate, Spanish Daddies Who Love Them. From sexy opening to pleasing end, Bulgarian Lovers is a smartly assembled, high quality production, richly filmed and competently acted, with dashes of humor throughout that lighten an otherwise disturbing tale.

Bulgarian Lovers is a love story, a crime story, and the story of two cultures — one rich, one poor — colliding. It is the story of wealthy, Spanish Daniel and the Bulgarian Kyril, a sexy political refugee (and rent boy and possible criminal) who first appears in a tight black tank top and then in Daniel’s bed. When we see Kyril naked — in bed, having sex, talking on the phone, in the bath — his appeal becomes even more evident. Kyril’s draw is tempered by his shockingly negative impact on Daniel’s life, and the lengths to which Daniel goes in order to keep him. Yes, this is a love story, but despite its sexiness and humor, it is also very dark.

Bulgarian Lovers utilizes voyeurism and voice-over narration to good effect. We see the story from Daniel’s point of view, not Kyril’s, and despite Daniel’s absolute infatuation, it is almost too easy to wish Kyril would simply go away. While the last half hour drags and twists unnecessarily, the film’s resolution is rewarding, and will make you laugh and smile. This is a good, solid film that will turn you on, make you laugh, wince, and think, and overall take you on a very enjoyable ride.