No Secret Anymore: The Times of Del Martin and Phyllis Lyon

By Metro Weekly Contributor on October 25, 2003

THANK GOD FOR Del Martin and Phyllis Lyon, and thank Reel Affirmations for making sure this film came back to the festival this year, finished and ready to shine. No Secret Anymore, which appeared last year as a sneak preview of the work-in-progress by local filmmaker Joan E. Biren (JEB), tells the important story of two lesbians who have been helping pave the path to something approaching equality for the past several decades. 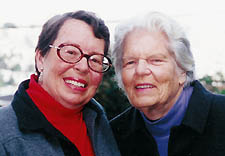 Everything we take for granted as gays — and more importantly, everything women in this movement take for granted — can in some measure be traced by to the unapologetic, tireless work of Martin and Lyon, from their bold participation and leadership in the Daughters of Bilitis in the 1950s to their iron-fisted insistence that the National Organization for Women set aside its homophobia and welcome its lesbian members in the 1970s, to their out and proud participation in the White House Conference on Aging in the 1990s. 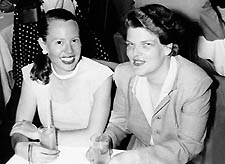 It’s no exaggeration to say that Martin and Lyon are treasures of the gay movement, and this film captures the story behind their influence and behind the love that’s kept them partnered in romance and in activism for nearly 50 years. It’s a blessing to film festival fans that a talented documentarian like Biren recognized the power and urgency of this story — we are able to hear these legendary women’s story in their own words and in their own voices, as well as see clippings, photographs, and video footage from the amazing history they’ve built.

No Secret Anymore: The Times of Del Martin and Phyllis Lyon