By Randy Shulman on October 15, 2004 @RandyShulman

“GOD MADE US all different, honey,” says Maria Lagatos to her son, Dorian, “to keep life interesting. You he made moody.” There's a very good reason for eighteen-year-old Dorian's melancholy state of mind: Having recently realized he's gay, he's fearful of what his arch-conservative, unloving father will think, and is overly-obsessed with the notion of spending the rest of his life alone and unloved.

The narrative terrain is not unfamiliar, and we know as we watch Dorian finally achieve — and subsequently lose — true love in Dorian Blues that he may one day lead a healthy, productive, and happy life as a proud gay man. But that doesn't make good drama — or comedy. And so it's Dorian's journey that takes center stage in Tennyson Bardwell's sweetly disarming, funny and wholly engaging first film.

Dorian Blues moves, sometimes gracefully, sometimes awkwardly, between comedy and drama. Tennyson has an adventurous filmmaking side — he's got a knack for quick-edit timing and an instinctive ability on how to build to a laugh — and his film is constructed in a manner in which even the routine seems fresh. At times, it's all a little too adorable, such as a scene in which Dorian dances with a happy hooker named Tiffany who tries to cheer him up. At other moments, it's positively inspired, as in a sequence leading up to — and following — Dorian's first kiss with another boy. 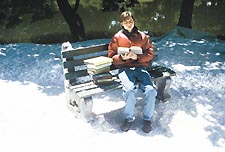 Michael McMillian delivers an appealing performance as Dorian, while hunky Lea Coco offers a nice brotherly foil as Dorian's football star sibling, Nicky. Mo Quigley is a little one-note as the family's detached mother, but her clueless demeanor ultimately provides the film its emotional kicker. And Charles Fletcher is stunning as the Lagatos patriarch, a severely unyielding dictator whose already strained relationship with Dorian grows even more so after he learns the truth about his son's sexuality.

Dorian's Blues may be a retread of a subject we've seen a little too much of over the years, but damned if it doesn't work up a magical spell nonetheless. It lifts you up, gently jostles you around, and, by the end, has provided you a ride as new and illuminating as it is familiar and comforting.