By Randy Shulman on October 16, 2004 @RandyShulman

THE INSTANT YOU see how much farmboy Duncan Mudge adores his pet chicken — he carts it around with him in his bike basket, it follows him on walks, they sleep together at night in the same bed — you just know the fowl will meet an untimely end.

What you can’t possibly know is how that untimely end will arrive. And it’s the how that ultimately gets to you. 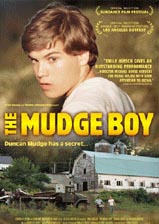 Written and directed by Michael Burke, the talent behind the 1998 short Fishbelly White, The Mudge Boy is a compelling powerhouse about loss and grieving, self-discovery and sexual awakening, and profound personal growth.

After the sudden death of his mother, Duncan, the shy outcast in a small rural community, tries desperately to connect with his rowdy peers. Duncan enters into a friendship with the neighbor boy, Perry, a virile, sexually-overdriven young man who endures the beatings of an abusive father. Through this unlikely friendship, both boys’ lives are forever changed.

Burke has a marvelous way with actors — and he gets a startling, potent performance from Emile Hirsch, best known for his work in such mainstream teen rubbish as The Girl Next Door. Hirsch, who has real acting chops, brings depth and poignancy to Duncan, a young man on the verge of self-discovery. Tom Guiry makes a sexually feral Perry, and Richard Jenkins (the father on Six Feet Under) hits just the right understated note as Duncan’s grieving, stern father. The movie is steeped in a Days of Heaven-like luminosity, courtesy of cinematographer Vanja Cernjul, and one shot in particular, set in a field aglow in sunlight, is so ravishing, it takes your breath away.

Some might grow impatient with The Mudge Boy‘s methodical, deliberate pace, but the payoff is worth it. The final moments leave you emotionally winded — and more than satisfied that you’ve spent your time in the company of a quality motion picture.

Randy Shulman is Metro Weekly's Publisher and Editor-in-Chief. He can be reached at rshulman@metroweekly.com.
← Previous Story Raspberry Reich
Next Story → Queerly Asian Shorts