The Origins of AIDS

ONE MAY WONDER about the importance of understanding how HIV first found its way into human beings. In the midst of the AIDS pandemic, isn’t it enough to try to prevent new infections and care for those already infected?

If there is merit to the point of view advocated by The Origin of AIDS, the source of HIV must be fully examined to prevent lightning striking twice. 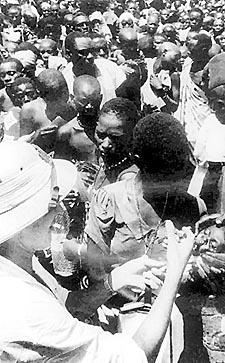 Origin picks up where journalist Edward Hopper’s book The River: Journey to the Source of AIDS leaves off. Origin examines the “oral polio vaccine” theory as the source of HIV. This theory holds that chimpanzee organs used to create one form of oral polio vaccine may have introduced the simian version of the virus to humans.

While the theory has been discredited in the scientific community, Origin offers chilling insight into what may transpired in virology labs in the Belgian Congo — now the Democratic Republic of the Congo — in the 1950s.

Following Hopper’s leads, filmmakers Peter Chappell and Catherine Peix return to the site where some say the vaccine was made. Interviews with Congolese who worked as nurses and technicians for Belgian colonists offer strong evidence that the Western scientific community has not heard the whole story. Other evidence presented in the film only bolsters the claim.

Narration by Miriam Heard, sounding uncannily like Cate Blanchett, adds to the highly unsettling message of this film: the use of animal organs to create medicines for humans may have caused AIDS, and it could happen again.

The Origins of AIDS