A DOCUMENTARY IS really nothing more than a visual piece of journalism. A good one will have something to say, be artfully told and maybe leave you better informed than you were before. 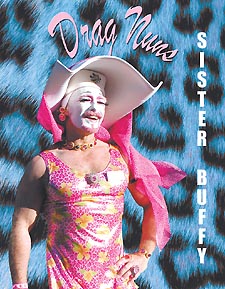 Drag Nuns in Tinseltown fails each of these tests. A light-hearted and often boring look at the Los Angeles chapter of the Sisters of Perpetual Indulgence, the film weaves together sit-down interviews with more colorful scenes from the Sisters' particular brand of street theater.

A 32-year-old philanthropic order, the Sisters cheeky code is to “expiate stigmatic joy and propagate universal joy.” Dedicated to charity, friendship and fabulous make-up, the order is a fixture at gay pride parades and AIDS benefits. They muck it up on behalf of safe sex, women's health and GLBT youth. It's a worthy and noble cause and no one can assail their commitment to good works and having a ball.

It's a shame their story wasn't placed in more capable hands. Writer/director/producer Ren Blood is certainly earnest about his subject matter, but his workmanlike approach to the film leaves its seams exposed, producing a dulling and tedious effect. Sitting through the documentary is more of a chore than good fun, and the piece feels more like a phoned-in community news feature than a candid look into an often-misunderstood subculture (think Paris is Burning). 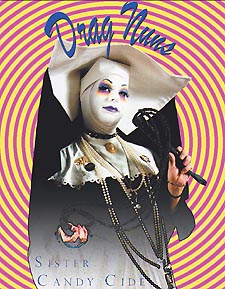 Yes, it's difficult to make widely appealing and successful documentaries. And, yes, nobody ever got rich off of nonfiction film (well, maybe Michael Moore). Yet, for better or worse, the burden still rests with the documentary filmmaker to make compelling work. If audiences have discovered anything in a post-Fahrenheit 9/11 world, it's that not all video journalism is akin to eating your broccoli.

But despite its rich material of naked-boy bake sales and drag queens in roller skates, Drag Nuns in Tinseltown is as tasteless and unhelpful as over-boiled peas.