By Randy Shulman on October 16, 2004 @RandyShulman

MIDWAY THROUGH THE oblique and frustrating thriller Testosterone, you find that you’ve grown tired of watching lovelorn graphic-novelist Dean (David Sutcliffe) search for his lover Pablo (Antonio Sabato, Jr.), who “left one night for a pack of cigarettes and never returned.” 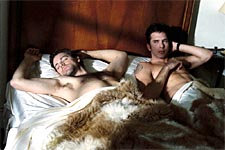 If I were Pablo, I too would have left the whiney, clingy Dean, despite his hirsute, pectoral-pumped chest. After all, there’s more to a man than just his body, isn’t there? (Well, isn’t there?)

And there needs to be more to a film than pure idiocy, but that’s pretty much what we get from director David Moreton, who did a much better job with his debut outing, Edge of Seventeen. Testosterone is the kind of movie that, once the ending hits you like a nylon stocking stuffed with bricks, prompts you to wonder, “Why didn’t I leave the theater an hour and a half ago?” 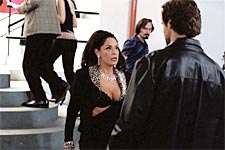 By the time Dean utters the line “I’m just a fag with a gun who needs a chainsaw,” Moreton’s movie has chosen a path of lunacy from which there is no return. The narrative offers up a smorgasbord of “twists” that anyone with even a basic knowledge of film noir will see coming a mile away.

For those who care about such things, Testsosterone includes a few mild sex scenes — though none of any consequence with Sabato, who really doesn’t have much screen time (and probably for good reason, given his inability to recite dialogue convincingly). 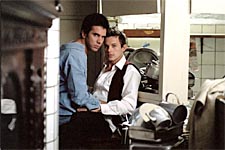 As Pablo’s controlling, razor-bitch of a mother, Sonia Braga gives a performance that is, at its best, one-note and shrill. As for Sutcliffe, only two words need be uttered: Gilmore. Girls. Sutcliffe is less an actor than he is a walking, talking mannequin. You keep looking for the pull string in his neck. And finally, a word about the hiring of Jennifer Coolidge, who plays Dean’s publisher. Why bother paying this masterfully funny woman if you’re not going to utilize her talents. And while some may titter at hearing her utter the “c” word, I found her performance to be every bit as dull and lifeless as this ungodly bore.

Randy Shulman is Metro Weekly's Publisher and Editor-in-Chief. He can be reached at rshulman@metroweekly.com.
← Previous Story Raspberry Reich
Next Story → Best of the Fest