AMERICA IS FULL of horrors for three cousins who illegally immigrate to the United States from Mexico. To escape the poverty that comes from hours of undocumented, black market labor, one turns to the drug trade, one to a wealthy Beverly Hills sugar mama, and the third finds a boyfriend. 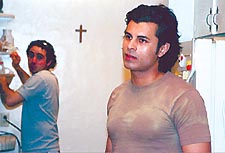 Actually, the boyfriend turns out not to be such a bad thing. This West Hollywood owner helps not one, but two of the three cousins get green cards.

There seems to be a slight double-standard in both the storyline and the direction when it comes to handling the gay component of this primarily straight story. One straight cousin can ask the cliché gay West Hollywood gallery owner to help him get a green card, while in same breath saying, “I don’t like what you do.” (He has a problem with the sodomy, not the gallery.) All this while the newly gay cousin lies near death. Gay moviegoers may find Gay Gallery Guy’s graciousness a little unbelievable.

A more obvious example of the disparity is the sex scenes. Both straight cousins find their way into some loving arms. The portrayal of these encounters is beyond PG-13. All we see of the gay cousin’s sex life is him lying in bed with his boyfriend, having an argument.

Still, The Day Laborers has charm. Where the film falls short of capturing the gay experience, it succeeds — with high production values and strong performances — in illustrating how seemingly restrictive family bonds can actually be some of the most nurturing human elements. That success is all the sweeter for making a gay element integral to the story.

Follow Will O'Bryan on Twitter @wobryan.
← Previous Story Drag Nuns in Tinseltown
Next Story → Black Aura on an Angel