COMPUTERS, CLOTHING AND rice are among Thailand's main exports. With Beautiful Boxer following on the heels of Iron Ladies and its sequel, films about successful transgender athletes should be added to the list. 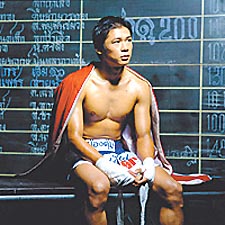 The Iron Ladies films recreated the success of Thailand's famous transgender volleyball team that won the national championship. Beautiful Boxer is based on the true story of Parinya Charoenphol, a celebrity Thai boxer who underwent gender reassignment surgery.

Beautiful Boxer tells the story of Nong Toom, showing Toom's journey from boyhood to womanhood. This king of Thai boxing becomes a queen before the country's eyes. The squeamish should be warned that the film is long on violence, pulling no punches when it comes to showing Nong Toom's bloody wins in the ring.

Although the production values are fairly poor, the story has enough heart to win over anyone who has ever rooted for an underdog. The campy high-heel fight sequence that opens the film may illicit some groans, but stick with it. Director Ekachai Uekrontham stays away from too many film gimmicks, though, preferring to let newcomer Asanee Suwan shine with a touching performance as Toom. In her few scenes as Toom's mother, Orn-Anong Panyawong is the only actor in the film who manages to outshine Asanee.