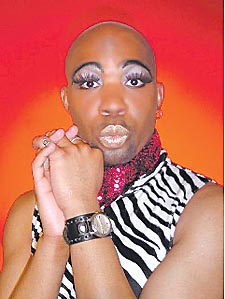 IN EVERY FILMMAKER is his first film. And, for many, that’s precisely where it should stay. The Ski Trip, a tedious and virtually joyless initial effort by writer/director/producer Maurice Jamal, is a hackneyed journey through the land of romantic comedy clichés, albeit with a cast of mostly black and Latino gay characters.

Jamal stars as Corey Brown, a lonely and frustrated cartoonist, who wakes up on his thirtieth birthday to find himself recently dumped, gaining weight and one unemployment check away from losing his apartment. Depressed and broken-hearted, Corey wants to hide in bed eating Krispy Kremes and watching reruns of Fat Albert.

If any of this sounds even remotely intriguing, don’t be fooled. The film is a patchwork of decidedly unfunny scenes, employing all of the two-snaps, you-go-girl inanities that are supposed to be what? Gay film? The self-indulgent whining of the main character is so annoying that viewers couldn’t care less about his sad state. You think you got problems, Corey? Get a life!

What in the end shines in this shabby rough draft is a soundtrack to die for: Destiny’s Child, Lil’ Kim, Missy. If it weren’t for the music, wellÂ… Even the film’s name is nonsensical. No ones skis in The Ski Trip. They don’t even talk about it.

It’s a disappointing effort for Jamal, a lead writer on Dave Chapelle’s often wonderful show on Comedy Central. Too bad he couldn’t tap into the biting wit of that show to infuse some much needed edginess into his film. Instead, viewers are treated to an insipid screenplay complete with a dramatic meltdown, redemption, and even a pregnancy or two.

Anyone who’s ever wanted to write a novel has surely heard the following advice: Write it, burn it, then write another one. It’s advice Jamal would be wise to heed.

← Previous Story Women on the Verge
Next Story → Friends or Lovers?