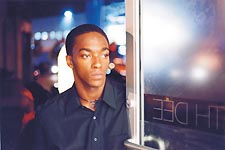 IN THE FORWARD-looking New World, history isn’t always a popular topic. The Harlem Renaissance, for example, is not a period that has been fully mined by American artists. Director-writer Rodney Evans, however, has dedicated six years to crafting a film that attempts to bring the Harlem Renaissance to contemporary audiences.

With sweeping views of the Manhattan skyline and a moody score by Marc Anthony Thompson — whose music also enhanced the emotional edge of 2000’s gay-themed Urbania — Evans pulls audiences into Brother to Brother immediately.

The world Evans creates is contemporary, yet artificial. His world is a metaphor for the continuity of culture. His protagonist Perry is a young, gay African American college student, rejected by his parents and, he feels at times, by his straight black peers. Youth and ostracism are a perfect formula for creating a character is completely unsure of himself. Enter Bruce Nugent as Perry’s new mentor.

Nugent was an actual participant in the Harlem Renaissance. As Nugent died in 1987, it’s obvious that Evans is employing a loose interpretation of facts. This creative license allows Evans to make other leaps, like Nugent taking Perry on a night out to revisit the gay stars of the Harlem Renaissance, in their time, on their turf.

(Reel Affirmations viewers will enjoy a sense of time travel as well. Nugent, a gay writer, was a Washington native. He began his artistic journey in the “S Street Salon” in Washington before moving to New York. The Lincoln Theater venue, opened in 1922, was a major point on the map for African American arts at the time.)

Roger Robinson’s soulful turn as the elderly Nugent is captivating. Anthony Mackie’s Perry is at times difficult to watch, which is to Mackie’s credit, as Perry is such an uncomfortable character.

Evans’ technique of flowing between early 20th century and today will help modern audiences find context. Judging by Brother to Brother, if Evans decides to make another film that remains wholly in the Harlem Renaissance, he will go from gold to platinum.