By Metro Weekly Contributor on October 22, 2004

Friday, 10/22/2004, 7:00 PM
Feature presentation, $9 at Cecile Goldman Theater at the DCJCC
In Spanish and Czech with English subtitles 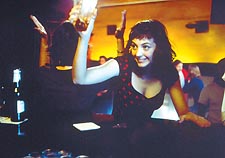 WRITTEN AND DIRECTED by Ines Paris and Daniela Fejerman, My Mother Likes Women is Hannah and Her Sisters meets Gaudi Afternoon (minus the genderbending delights of the latter.) Three adult daughters (Elvira, Jimena, and Sol, played by Leonor Watling, Maria Pujalte, and Silvia Abascal) try to break up their mother’s new relationship with a woman their own age.

Their plan? Use Elvira to seduce Eliska (Czech actress Eliska Sorova), under the belief that their mother’s pride would never allow her to take Eliska back after having an affair. The only problem is that Elvira is a little confused about her own sexuality, and might actually be interested in a little ooh-la-la with the lovely Eliska. Or she might really be interested in Miguel (Chisco Amado), the author she’s met at her publishing firm, except that she can’t stop herself from spoiling every interchange they have.

Naturally, all this leads to a whimsical farce of confused relationships as the daughters try to figure out whether Eliska loves their mother Sophia (Rosa Maria Sarda) for herself or just for her money, Elvira tries to decide whether she likes women or men (or both), and Sophia tries to figure out how to get these meddling daughters to grow up and get out from underfoot. In a world full of dyke drama, My Mother Likes Women is a relief to enjoy, with a storyline that doesn’t take itself too seriously and actors who know how to take every opportunity to enhance the absurd comedy of their characters’ silly decisions. Take it like a dose of Alka-Seltzer to lighten your load after some of this festival’s heavier offerings.