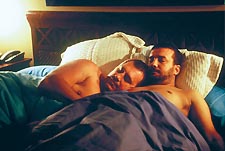 FROM THE OPENING scene of two bears frolicking naked in the sheets you know you’re in for a treat with Bear Cub (Cacharro). But like a long, multi-course European meal, Bear Cub reveals new flavors and surprises with every emotionally taut scene. Smartly scripted and lovingly acted, the story reveals itself layer by layer, entwining us in the lives of a colorful, quirky and totally genuine “family” that surrounds Pedro and his nine-year-old nephew Bernardo.

When Pedro’s free-spirited sister Violeta leaves Bernardo with him for two weeks while she goes to India, early indications are that all is not quite what it seems. Pedro takes instantly to temporary fatherhood and re-centers his life around Bernardo, leaving his sexually care-free life behind for the moment. But when Violeta’s stay in India becomes indefinitely extended, Pedro must not only hold Bernardo together, but himself as well. The two form a strong bond of mutual respect and love which is played out in some superb scenes that show Bernardo is a wonderfully well adjusted, intelligent child who loves unconditionally.

The story takes several interesting and unexpected turns as Pedro deals with custody rights, blackmail, HIV status, illness and a seemingly heartless grandmother, all in order to keep Bernardo where he wants to be, at home with Pedro. Although his efforts are ultimately in vain and things seem dire, the final lesson is that as long as the intentions are based on love and respect, all will be well.