Men on the Verge 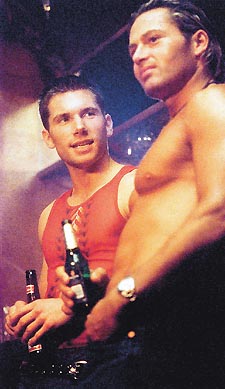 “MEN ON THE VERGE” could have just as easily been titled “Men in Australia,” as this series of shorts seems focused exclusively on gays who say “g'day.” Not that there's anything wrong with that.

In fact, in some cases, there's everything right with it, as this turns out to be one of the strongest shorts programs of the festival.

) begins with a phone call that launches an emotional race to the hospital, where a drag queen who hadn't come out to his family comes to the bedside of his dying mother. Intercut with flashbacks that illuminate his mother's role in developing his courage, the film packs an emotional punch that culminates in a surprising moment.

Your perception of reality can be altered when you're in a gay bar, and not just from recreational substances. Two Minutes After Midnight (

) both take place the same time in the same bar — scenes from each short play out in the background of its companion. Two Minutes is the more successful, as a circuit-boy fairy godmother grants a despondent barfly the chance to be the ultimate desire of any man who choose. Needless to say, being someone's ultimate desire ain't all it's cracked up to be (think diapers). Judas Kiss, on the other hand, lingers on a lover's discovery of betrayal, all set to the music of Handel for a boring and non-revelatory viewing experience.

) feels like watching a short story in a small literary journal; not a bad thing aside from the sense of structured formality that tints the script. But watching poor Roy on the lam with his marriage-fleeing mother, who calls him Toodles, look for love in the arms of a trailer park manager has both moments of humor and despair, often at the same time, such as realizing Roy's mother sounds like a cancerous Jennifer Tilly. 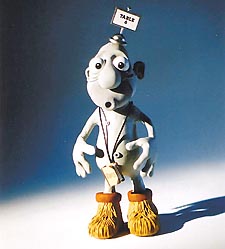 ) is a cute lark about the desires released when a man dons his female squash partner's skirt. Unfortunately, it goes nowhere. Better, though, than Harvie Krumpet (

), a claymation affair that begs the question of why it's playing at a gay film festival. Little Harvey is born with Tourette's to a crazy mother, loses his parents to the Nazis, escapes to a life of menial work in Australia, discovers nudism, and adopts a thalidomide baby among other things. Not nearly as interesting as it may sound, and deadened all the more with soporific narration by Geoffery Rush.

Men on the Verge