By Randy Shulman on October 23, 2004 @RandyShulman 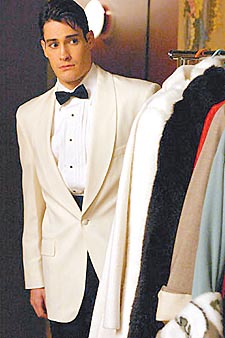 RICHARD DAY CLEARLY has trouble making up his mind. On the one hand, this second feature (his first being the drag-saturated doldrum Girls Will Be Girls) yearns to be a frothy screwball comedy, packed to the rafters with snappy comebacks and oddball comic moments. It rides the nutty wave pretty well until Day decides, midway through, that he has a greater point to make and the story plows headfirst into Serious-ville. The subsequent statement about the career-ending perils of homosexual involvement in 1950s Hollywood isn’t just worth a yawn, it’s worth a full night’s sleep.

Guy Stone (blandly portrayed by Good Morning Miami‘s Matt Letscher) is a closeted gay movie star who, against the advice of his agent (a brittle, stern Veronica Cartright) takes a stand against Hollywood by discarding his clueless beard of a wife for a yummy-nummy screenwriter (Adam Greer, who can’t act worth a damn, but doesn’t need to, what with his Cinemascope-shoulders). The movie’s “it’s okay to be gay so long as you have love” moral is so old, it’s a wonder it hasn’t been put alongside the rest of the mummies at the Smithsonian.

Straight Jacket‘s wildly schizophrenic tone wouldn’t be as annoying if Day were a more skilled director. His pacing is one step above halting, his way with actors is to essentially dip them in starch and hang them out to dry, and his visual sensibility is in desperate need of glasses.

And yet, Straight Jacket possesses the kind of smartass, bouncy-flouncy appeal that should play well on closing night (so long as the audience arrives directly from happy hour). But please, let’s not mistake it for something of genuine quality or cinematic daring, for something that contains ingenuity or the finesse of a good performance (not counting Michael Emerson, marvelous as a droll gay butler). No, this is a film so resolutely mediocre, it may just do the trick for Day and advance his career in Hollywood, a place where mediocrity is prized above all else.