By Metro Weekly Contributor on October 15, 2005

LIKE A BAD Lifetime move (is there any other kind?), Hate Crime is nothing more than barely viewable movie-of-the-week fodder. Though it begins well enough, it quickly spirals downward into absurdity and the very schmaltz for which Lifetime is so pilloried. 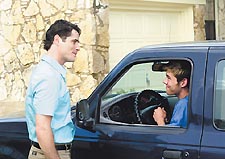 Set in suburban Dallas, Hate Crime opens with a bucolic slice of heaven: kids, dogs, married couples in love. Enter Robbie Levinson (Seth Peterson) and Trey McCoy (Brian J. Smith), the cute gay couple next door. About to be married, this handsome duo is doted on by relatives and neighbors alike.

That is, until the scary, anti-gay, Bible-thumping Chad (a convincing Chad Donella) moves in next door. Unsurprisingly, he takes an immediate dislike to the wonder couple. And before long Trey ends up savagely beaten while walking the dog one night.

It's here where the story approaches a fork in the road. The high road may have involved a powerful commentary on violence and homophobia in America, a kind of Mississippi Burning for today. Instead the movie jumps the shark. In an annoying and improbable turn, Robbie begins investigating the crime, running around town with a tape recorder and gun. He enlists the help of Trey's mom, and the two end up looking more like Cagney and Lacey than bereaved husband and mother.

The redeeming attributes of the film are desperately few. Bruce Davidson plays a firebrand preacher, a casting irony not lost on those who remember and love him from Longtime Companion. There's also an interesting storyline involving the Bible-thumping neighbor, who's consumed by his own battles with same-sex attraction. Isn't it always the ones just like us who end up screwing us over the most?

According to the Internet Movie Database, writer/director Tommy Stovall, a former wedding videographer, had never been on a movie set before filming Hate Crime. Unfortunately, we can tell.