The Pursuit of Happiness

By Randy Shulman on October 15, 2005 @RandyShulman

IT’S EASY TO TAKE for granted living an out gay life in Washington, D.C. But what of those who choose to reside in the middle of the country in small, isolated rural communities, and attempt to forge a meaningful gay life against the odds? In Bachelor Farmer ( 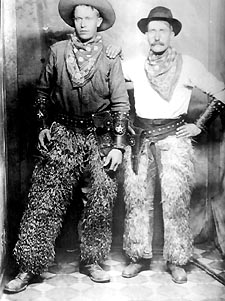 For such a small town, there are a surprising number of gay residents. They appear to live an open life, but are candid about the realities of being completely out. ”You can’t upset one person and go to another group for new friends,” says one resident. ”You’ve gotta find a way of working out your differences.”

”My folks were mortified that everyone was going to shun them,” says Mark Mustoe, who came out later in life, and left Kendrick, as well as a wife and kids. ”We’re not wearing pink triangles here,” says Steve Dunning, who lives with Jerry Galloway (their romance is recounted in a playfully sweet cross-cutting sequence), ”we’re just living our lives…. Just another married couple in a farm community.” Still, he notes, ”[we] can’t walk down the street hand in hand.” Adds Jerry: ”[Fear of retribution] is always in the back of my mind.” Another resident remarks that his being out helps to provide an ”ongoing, low-key education that can happen in a small community,” though the movie recounts several battles that divided the community, including the making of Bachelor Farmer.

Which explains why there aren’t many opposing points of view from the non-gay townsfolk — a point of view the film really could have used. Still, the movie has something of a self-contained miracle in the commentary of Harold Crook, the town’s Methodist minister, who says, with a note of self-astonishment, ”I’ve come from believing that gay marriage and the gay lifestyle are sinful, to really reconsidering my beliefs.” Bachelor Farmer is a smart, well-crafted reminder of how far we’ve come — and how far we still have to go. 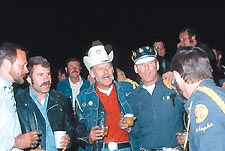 ), an engaging, slightly too-ambitious look at California’s Satyrs, who claim to be ”the oldest continuously active gay organization.”

Directed by Scott Bloom — himself a Satyr — the movie has its flaws (among them, bombastic narration by Peter Brooks), but it’s a great primer for those unfamiliar with the motorcycle clubs and their masculine mystique. The fraternal nature of the Satyrs is best represented in the impressively cultivated archival footage from the Badger Flat motorcycle run — an annual gathering that remains among the country’s largest.

The impact of AIDS is touched upon — but not dwelled upon — and a scene involving the spreading of ashes at Badger Flat brings a tear. The recollections of some of the elder Satyrs are fascinating — particularly John Laird’s story of a fateful meeting with the Hell’s Angels. And then there’s the legend of Kate Smith, which shows off the lighter side of the club.

Members of our local leather community will no doubt revel in the film. But Original Pride is really meant for those who still don’t quite get our leather subculture, who dismiss them as nothing more than cultural fringe, one that’s a hindrance to our greater political goals. Nothing could be further from the truth, of course, and watching Original Pride is to have your mind opened once and for all.

The Pursuit of Happiness

Randy Shulman is Metro Weekly's Publisher and Editor-in-Chief. He can be reached at rshulman@metroweekly.com.
← Previous Story Unveiled
Next Story → The Favor