IN THE BEGINNING, there was the bulge. It was legendary from the public parks of Berlin, to the hipster lofts of New York, and to the newly liberated streets of San Francisco. 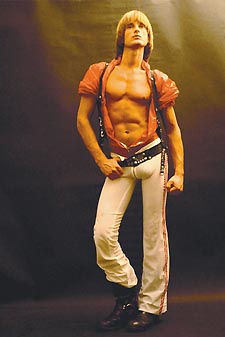 ”I was amazed how little one has to do to be picked up by the press,” says Berlin of his self-made fame. Haunting the streets in his trademark skintight white pants – which he still sports at 60-years-old — he created a gay sexuality of exhibitionism and voyeurism. To hear him, and others, tell it, he was never cruising for the sex, he was cruising for the looks.

Watching the aged Berlin hold court in his knick-knack filled apartment where every wall is jam-packed with photos and paintings and prints of the artist, it’s hard not to see narcissism as his primary motivator. Tushinski delves into many aspects of Berlin’s life — the final story of the death of Berlin’s partner of 20 years is moving — but skims too quickly over other topics. In fact, in a chapter ostensibly devoted to drugs you get an almost offhand dismissal of the topic by Berlin. One senses there were places the icon did not allow opened.

While Berlin himself can be off-puttingly self-centered, occasional commentary from others highlight his historic role and provide much needed context. Armistead Maupin provides a telling anecdote about encountering Berlin in one of San Francisco’s cruisiest locations. John Waters steals the show with his on-target observations of watching Berlin stalk the streets: ”It was like Dinah Shore with a hard-on with that hair.”