EVERY SO OFTEN a film comes along that reminds you of what you’ve been missing everywhere else. This year, Fingersmith is that film. Based on Sarah Waters’s novel of the same name, Fingersmith tells a profoundly disturbing tale of scheming and betrayals in Victorian England, as a cadre of thieves plots to divest a young aristocrat of her inheritance. A burgeoning love interest between one of thieves and the young aristocrat may (or may not) thwart the thieves’ plans, but this is only one of many twists that keeps the audience wondering what will happen next, and whether anyone can be saved from a grisly end. 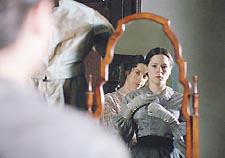 Immaculate sets, convincing period costumes, and (most important) impeccable acting from a fantastic ensemble combine to bring the dark labyrinth of Waters’s novel to life. Elaine Cassidy as Maud and Sally Hawkins as Sue Trinder lead with commanding performances. Imelda Staunton as Mrs. Sucksby dances through every incremental emotional shift required by the character’s evolving machinations, while Charles Dance as Mr. Lilly quietly oozes an uncomplicated but profound evil.

Fingersmith has clearly benefited from a faithful screenplay by Peter Ransling and a firm guiding hand by director Aisling Walsh. Every twist of Waters’s novel is as abrupt and startling on the screen as it is in the book. The atmosphere of preordained doom as each lock in the thieves’ trap clangs shut carries through perfectly. If you like being truly surprised by a film (or a novel), with head-spinning 180-degree twists that keep the tension going beyond what you thought was possible, Fingersmith is the film for you to see at this year’s Reel Affirmations.