THERE ARE CERTAINLY worse ways to spend an hour than at ”Young & Wild,” a collection of short films geared toward the baby dyke set — especially since there’s no admission.

) is poignant and well made, with a young lesbian named Henry searching for her father, which turns into a search of her own soul. Her funny gay sidekick Twig is amusing, but the fellow playing him needs some acting lessons.

) is bizarre and surreal and leaves the viewer scratching her head — although there’s some cool underwater footage. Jesse James (

) is basically a cute music video described in the Reel Affirmations festival program as a ”riot girl musical.” There’s no dialog, just a song (which isn’t bad, by the way) and something of a storyline. 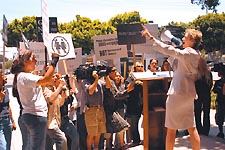 ) is heavy, the emotional tale of a young Latina lesbian’s run-in with abusive homophobic police officers, with some heartbreak thrown in for good measure.

) is a ”mockumentary” in which the main character is so convincing that at first you think it’s a real documentary of a teenager describing her decision to take another girl to prom. And then it launches into other interviews and lightens up considerably. Out lesbian Cassie gets invited to prom by childhood friend and prom queen-wannabe Tiff’ny, who gets stood up by her boyfriend — who threatens to kill any other boy she goes with — but can’t fathom not being at the premier ”couples-only” event of the school year. The film features a terrific performance by Jane Lynch (the lesbian dog handler from Best in Show) as a homophobic parent protesting the radical act. Although she’s being used for esoteric purposes, Cassie ultimately finds a real date prospect in a place none of us probably thought to look.