A Love to Hide 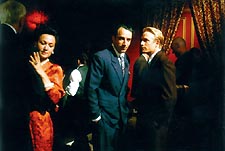 THERE’S SOMETHING SO sweet and atypically graceful about A Love to Hide that it quickly transcends the genre of ”gay film” and becomes merely an elegant, deeply felt story about how the Nazi era tore people apart and, at the same time, forced them together.

Jean and Philippe, two young lovers, take in a childhood Jewish friend, Sarah, whose family has been killed by Hitler’s police force, and struggle to survive as a family in an unforgiving society. Depicted with genuine emotion, the story of the three is told mainly through the eyes of Jean, who faces a crisis when his brother arrives on the scene and brings unwanted attention to their lives.

The stunning visual effects of the movie summon thoughts of Jean-Pierre Jeunet (A Very Long Engagement), with an almost constant glide of the camera that counterbalances the gravity of the subject. Across the board, the cast is superb. Jean and Philippe play off of each other with remarkable chemistry, and Sarah’s character is so impressively wrought that she nearly carries every scene she’s in on her own small shoulders. The sets and costumes appear authentic to the time, and the story arcs so naturally that you can’t help but feel like you have a direct investment in this moment in history. A remarkable piece of work.

A Love to Hide