I KNOW I SHOULDN'T, but I sometimes approach movies with strong pre-conceived notions. In the case of Hard Pill, a film about a fictional ”cure” for homosexuality, I fully expected to be beaten over the head repeatedly with an unsubtle and didactic political stick. 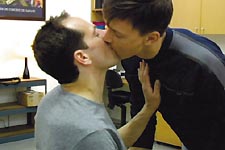 Man, was I wrong.

Hard Pill is actually one of the best films offered this year, an honest and often emotionally scathing look at what a ”cure” for homosexuality might actually mean in the everyday lives of gay men.

Then Tim announces at his birthday party that he's going to be part of a new study testing a pill that chemically turns gay men into heterosexuals. Joey is enraged, while Sally is shocked but secretly hopeful that her own dreams may have a chance to come true.

One of the main reasons Hard Pill works so effectively is the amazing performance Jonathan Slavin gives as Tim, a character who's simultaneously off-putting and sympathetic as he keeps searching for happiness in all the wrong ways. Tim isn't a character you can love, but Slavin makes him a character you can care about, which makes the damage Tim does to himself and those around him all the more tragic and devastating. And the price Tim pays in the end is very, very high.

Director John Baumgartner, who also wrote the script, lets his story play naturally and honestly. Even the brief interludes of TV news man-on-the-street interviews about the new ”gay cure” present the pro-cure people as average friendly neighbor types, a far creepier and more effective approach than the usual raving right-wing religious nuts that directors too often fall back on to score an easy shot.

Hard Pill contains some bitter medicine, but that's often the kind that's most needed. It's an intelligent and engaging display of filmmaking that should not be missed.