LITTLE MAN IS an intense, deeply personal and gripping documentary about the life of a little boy born 100 days early and the havoc his early arrival wreaks on a lesbian family. Filmmaker Nicole Conn, best known for the 1992 film Claire of the Moon, takes a bold personal and professional step when she puts herself both behind and in front of the cameras, chronicling the story of her own preemie son. 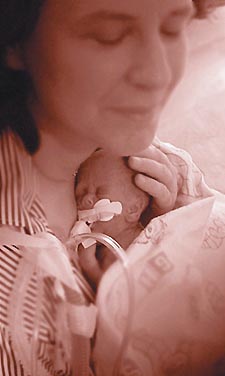 She and her partner, Gwen Baba, have a daughter but want to have a second child, and neither of them can carry the baby. They hire a surrogate who’s implanted with Conn’s eggs, learning only after the pregnancy is under way that the surrogate misrepresented her health and is a high-risk medical case. Doctors recommend aborting the fetus, saying the chances of a complete pregnancy are slim, but Conn refuses. Sure enough, Nicholas needs to be delivered three and a half months early and emerges with a whole host of severe medical conditions. The doctors cite a .0004 percent chance of his survival and urge Conn and Baba to let him die peacefully. Baba’s on board, but Conn can’t give up the fight: ”I love my little boy. I love him with a fierceness that borders on insanity.”

And it does seem insane, pushing so hard to keep Nicholas alive when he barely looks like a baby, his tiny hand fitting snugly over the tip of a pinky finger. The film features candid interviews with Conn, Baba, close friends and their attorney, and doctors and nurses who were part of the large and tireless team that worked on Nicholas. Throughout much of the film, Conn is alone in her bid to give Nicholas every chance — no one thinks it’s a good idea and her fervent quest takes a harsh toll on her relationship with Baba. There’s a strong tendency to judge and perhaps condemn Conn for putting her baby through so much during the first half of the film, but her resolve is vindicated when Nicholas survives some of the biggest hurdles and becomes a smiling, laughing, adorable baby. Some of the footage is difficult to watch, but the story is so touching and rewarding that it’s worth it, even for the medically squeamish.