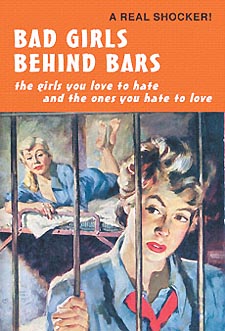 WHAT TWO WORDS have I always wanted to say to Pam Grier? ”Yes, Matron!” If you're like me, you'll get your chance to give Pam a shout out at the screening of Sharon Zureck's paean to pulp fiction, Bad Girls Behind Bars. Playfully splicing together four films of lesbian-baiting girl-on-girl action from four different eras, Zureck manages to weave together the parallel travails of the ”new fish” behind bars without adding any additional footage that might disturb the pulpy purity of her source material.

The films in question feature Barbara Stanwyck in Ladies They Talk About (1933), the unremarkable Girls in Prison (1956), Pam Grier as an angry warden with a penchant for S&M in Women in Cages (1974), and finally Showtime's made-for-cable spoof of old-school women in prison films, Girls in Prison (1994), with Anne Heche making an appearance as a short-timer in more ways than one. Whether the end result is equal to or more than the sum of its parts is open to question. A very loosely stitched together plot(s) and four sets of protagonists make for a bewildering array of details to keep track of. Fortunately, that's not really the point here. Zureck gives us a chance to gather round the campy fire of lesbian lore and have a good laugh on ourselves, as well as on Hollywood's view of us.