ANOTHER YEAR, ANOTHER Reel Affirmations, another gay vampire movie. And yet again, it’s one that really bites. 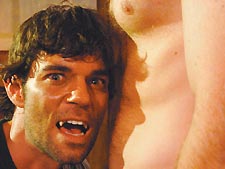 Set in the seedily sexy underworld of L.A. and Las Vegas that only exists in the fevered imaginations of legions of Anne Rice fans, Scab opens with a trick gone bad. Ajay has brought home a vampire. Not just any vampire, but a barebacking, rapist vampire. Because, as we all know, sexual metaphor and vampirism go hand in hand. Occasionally with a bit more subtlety, granted, but I have to deal with the metaphor Scab dealt me.

Ajay is soon craving the red stuff, and his friends Teague (filled with tasty innocence and unrequited love) and Floor (don’t ask me, I didn’t name the horn-dog straight guy) are driving him to Vegas for… well, something about Ajay getting his head together. But whatever it is, they all end up at the Harmony Motel where the nonsensical plot eventually arrives at the obligatory bloodbath and not-so-twist ending.

The story doesn’t make a lick of sense. Characters know things that haven’t come up in conversation while minor characters kill chunks of screen time with faux-Tarantino banter. A nebulous network of vampires may be watching from the sidelines, or maybe not. Who knows? Who cares?

It feels like the loosey-goosey script was written to try to make a story out of a couple of good, but small ideas. I particularly liked an early scene involving Ajay, a blender and some small furry animals, as well as an inopportune moment to lose a tooth. But a handful of inventive visual jokes aren’t enough to carry whole film. The end, when it comes, is as welcome as it is bloody.