WHEN THE ONLY theme shared by a slate of films in a shorts program is their running time — approximately 15 minutes — you can pretty much bet on a mixed bag of quality. ”15 Minutes for 15 Years,” a nod to this year’s Reel Affirmations anniversary, is decidedly mixed. 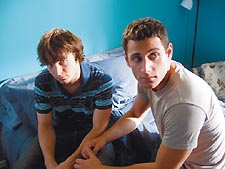 On the plus side, from Ireland we have Falling Angels (

), a story of two young boys playing hooky from school, generating some minor mischief, and saying ”fooking” an awful lot. Things get a little darker when an older guy enters the scene with some obviously disturbing desires.

) a blind, aged painter attempts to continue his work by using a young hustler as his hands at the canvas. It’s surprisingly touching as it follows the hustler’s discovery of his own inner value.

The B-Girls return with The Dress (

), an amusing drag fantasy about three drag queens who all have their eye on the same designer dress. Full of odd lines (on catsup: ”It’s the elixir of the tomato”) and double takes, it’s a broad platter of Canadian camp.

Coming in from France is One Fine Day, A Hairdresser (

), a visual representation of the chaos in a fucked-up escort’s mind that plays more like a low-budget special effects tech demo than an actual film. Starcrossed (

) is about two brothers who take their relationship into uncharted incestuous territory. After crawling along at a snail’s pace, things suddenly spiral unbelievably out of control.