By Randy Shulman on October 22, 2005 @RandyShulman

IT ALL ENDS here, with a brilliantly acted, deeply absorbing drama about a young gay man (Kip Pardue) who comes to a North Carolina beach town to save its endangered Loggerhead turtles and winds up saving himself — for a time. 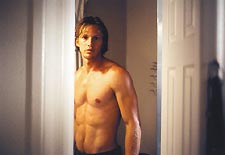 That's only part of the story, as there are two other related tales, one involving Elizabeth, the repressed wife of a minister whose trying to reconnect with her estranged son, the other involving a woman who years ago gave up her son for adoption and now yearns to find him. The individual narratives converge upon one another with a potency that only becomes apparent in the final 10 minutes. Directed by Tim Kirkman, who made the terrific documentary Dear Jesse and the filmed version of David Drake's The Night Larry Kramer Kissed Me, Loggerheads feels almost effortless in its complexity.

Filled with magnificent performances from Tess Harper, Bonnie Hunt, Michael Learned and Chris Sarandon, the movie is weighty without being overwhelming — its dramatic current draws you in without pulling you under. And the writing exhibits the kind of spare qualities that comprise genuine conversation.

”He's sick,” says Elizbeth to her husband about their son.

Loggerheads is about the need to connect, to reconnect, and to find meaning in a simple act of salvation. In this case, those who need saving most are human beings — and their salvation comes at a price — though it turns out to be a price worth paying.