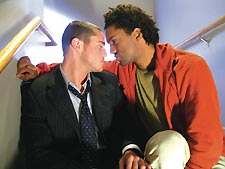 A VOICE-OVER narration that condescends to the audience isn’t the most auspicious start for a film, particularly for Boy Culture, the story of a Seattle hustler trying to find his own ability to love while plying his trade.

”I’m gay and they’ve made a movie about me. Keep up,” says X, the anonymously named protagonist, whose self-involvement is off-putting to both the viewer and the rest of the characters. For tax purposes, X shares his fabulous apartment with two others: recently out Andrew (Darryl Stephens of Noah’s Arc) and runaway teen-queen Joey, both of whom harbor feelings for X.

But X, as he explains in excruciating detail, is a judgmental sort, ”a hustler with morals…not a slut.” Unable to allow himself an emotional connection with Andrew and struggling with his paternal instincts for Joey, X finds himself drawn to his newest client, the elderly and worldly Gregory.

Although X spends much of the first half or so of the film explaining everything — a bit more showing and a bit less telling would have been nice — as he starts shutting up more often, Boy Culture starts pulling you in. It also pulls some surprises — while there are a handful of cute butt shots throughout, director Q. Allan Brocka chooses to make a revelatory sex scene between the studly X and the geriatric Gregory the most explicit and charged sexual moment.

The performances are strong all around — even Jonathon Trent’s initially grating Joey becomes a welcome presence. Stephens is about six different ways of cute and then some, and he plays Andrew’s indecision in a much less frustrating way than X’s. Then again, Magyar’s a bit hamstrung delivering all the tedious narration.

Rough at the start and smooth by the end, Boy Culture ends up mirroring (purposefully or not) X’s own journey, which is a surprisingly enjoyable one. — Sean Bugg 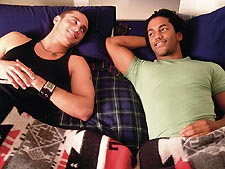