By Metro Weekly Contributor on October 15, 2006 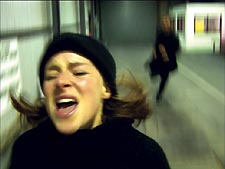 FANS OF JIGSAW puzzles and word jumbles might appreciate Gypo, a film so scattered and out of order that it's difficult to know exactly what's going on until it's over. It's reminiscent of Memento, but none of the characters in Gypo are claiming memory loss and the scenes are not presented in such a methodical way that they can be followed easily. There is some substance, though, and for those patient enough to sit and wonder what's going on until all is revealed, it's not a bad cinematic trip. Provided the viewer isn't already tripping on something else.

It's hard to imagine that Czech immigrants in modern-day England suffer the level of harassment and xenophobia that's depicted here, but being neither fluent in British culture nor an immigrant is a good reason to not make sweeping assessments on that point. Taking the premise at face value, the film tells an interesting (though difficult to swallow) story. Helen (Pauline McLynn) is a middle-aged mother and grandmother who constantly harps on her daughter, Kelly, to take better care of baby Jordan. When Kelly brings home some friends, including the beautiful Tasha (Chloe Sirene), Helen and Tasha form an instant, and somewhat mysterious, bond. 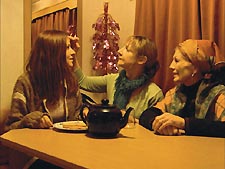 It's not until fairly late in the film that the gay premise becomes clear, although it's implied much earlier. Still, Tasha's attraction to Helen isn't well established and leaves the viewer wondering why such a beautiful young woman, who continues smiling in the face of extreme adversity, is so taken with a haggard, nagging, middle-aged housewife. The film's promotional materials make a big deal out of its distinction as the first British feature film to be certified as an official Dogme95 production — which essentially translates into no filming frills. It's not a flashy picture, but its visual simplicity is refreshing, even as its lack of continuity is an unintentional brainteaser. — KC