Mixed Shorts: Best of the Fest

By Randy Shulman on October 15, 2006 @RandyShulman 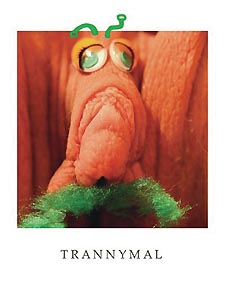 AS ALWAYS, A dependable collection of shorts from all stripes. Delerious Jen (

Seeing You in Circles (

) employs a sophisticated narrative structure and lush visuals to tell the tale of two ex-boyfriends who return to their favorite diner with a third wheel in tow. Bleak and morose, it fizzles at the end, uncertain of how to resolve its three-way situation. About the only thing it reveals is that a Don Pedro is a chocolate milkshake with a shot of whisky in it. Yummy.

) is a nutty little treasure from Guinevere Turner (Go Fish). Five lesbians take a serum that allows them to grow a penis for a day. After comparing to see who has the largest, they go off in search of, you guessed it, sex. Well, at least four of them do. One is so infatuated with free-standing peeing that she spends the day drinking bottled water and relieving herself on trees. A cute, slick little flick.

Any of you old enough to remember The Groove Tube? Recall the portion where an upside-down penis, with fake ”doll's eyes” instructed you on the hazards of V.D.? Well, Trannymal is sort of like that — but without any of the humor. Looking at the little vag-penis combo, outfitted with eyeballs and green hair, perform tricks is a little freaky. At least it's over in under two minutes.

) is the entrancing story of a girl and her drag-queen father, who succumbs to AIDS. Brightly colored and a little on the surreal side, it finds potency in the performances of Eliza Darby and William Houston. Joe Tunmer's film almost singlehandedly revives your faith in the ability of a short film to sweep you into another world and knock you to the ground with an emotional whollop.

Also in this collection, My Cat's Balls (

) both of which are reviewed in other collections. — RS

Mixed Shorts: Best of the Fest